The BEST WILD HORSES encounter ever at the Salt River, they are everywhere!

We had the best encounter of wild horses yet, and I had to share it! A video is the only thing that will come close to doing it justice, so… enjoy!!

I’ve done this many a time.
One trip, we did the Salt by moonlight (midnight paddle) when someone called, “Horses on river right”. We looked over to watch, by the light of the Full Moon, a herd of mares and colts grazing in the river.
Then someone yelled, “STAMPEDE!” and the rest of the herd charged across from River Left to join the mares. They ran between and some jumped over our kayaks!
I just ducked and hoped that the hooves would miss my head.

Where is this Salt River? Clearly it’s not the one I know!

The Salt starts in NE Arizona and flows through the Roosevelt Lake system into Phoenix, then west to eventually reach the Colorado River.

The stretch we are discussing runs from Steward Dam at Saguaro lake (home of the 12’ catfish) in Northerm Phoenix, along the border of phoenix for about a dozen miles.
It is a popular tubing and day-paddling area with a number of wild horse herds along the shores.

Thank you! I’ll make it out there again someday!

We’ve encountered herds while rafting on the Green River/Desolation Canyon several times. A few years back we had some really close, similar to the video above. Happy to say, none within hoof distance like RikJohnson’s encounter.

These wild horses are part of a herd I have encountered on numerous occasions.
I was NOT using a telephoto lens when I took these photos.
I’ve found that if you move toward them at an angle (very slowly) instead of a straight line to them, and you don’t make eye contact, you can get very close. I’ve been as close as 9 foot from some of them on several occasions.
Young colts are prone to walk up to you, if not controlled by the adults.
Brave or foolhardy colts make for nervous adults. 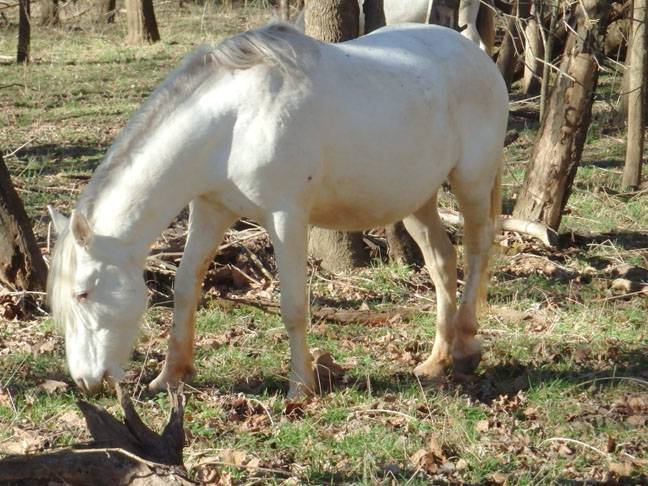 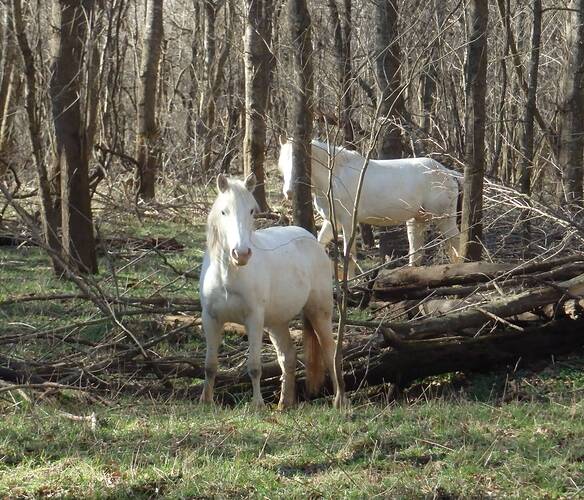 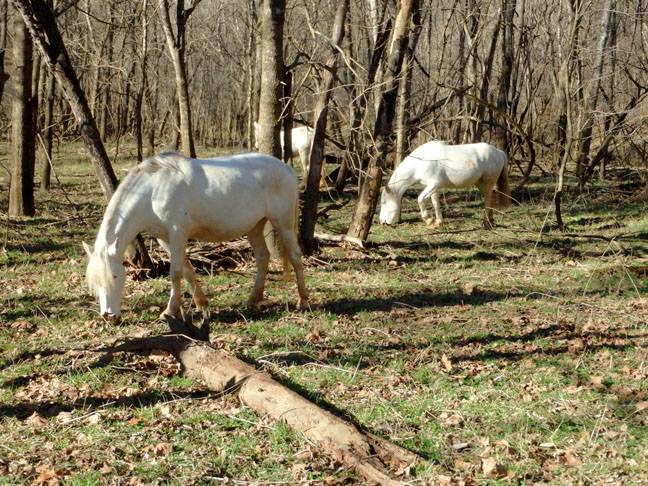 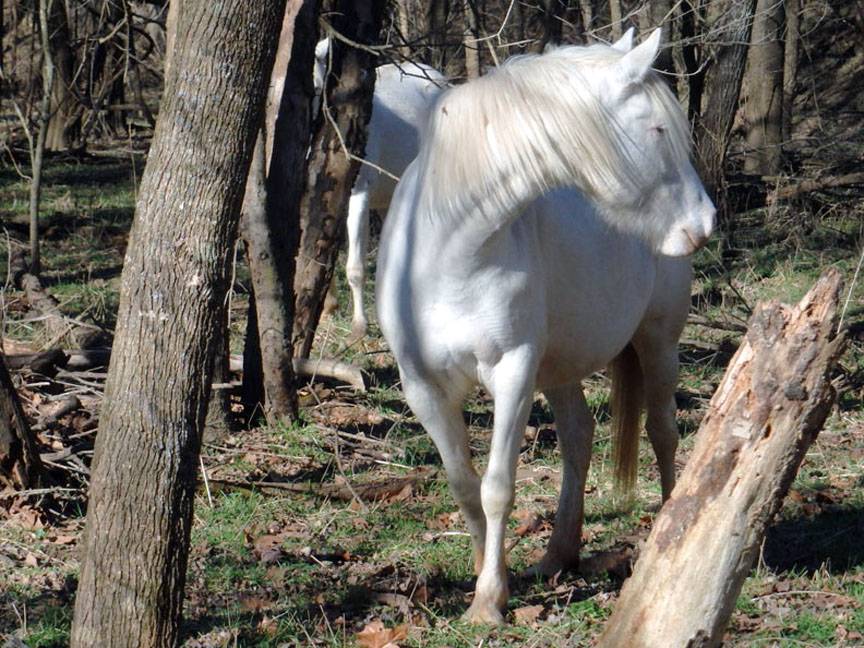 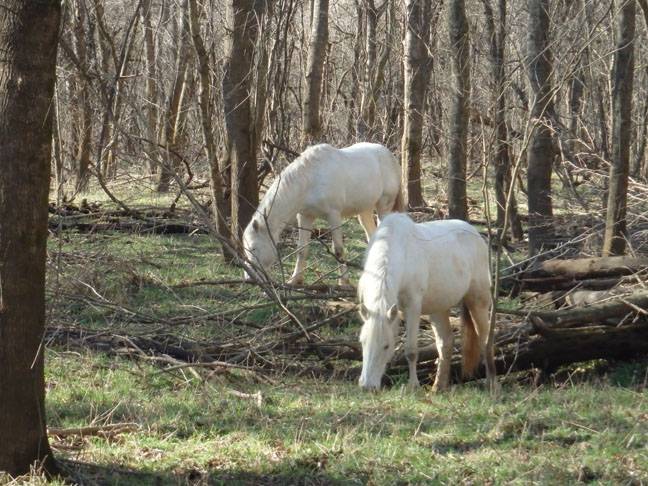 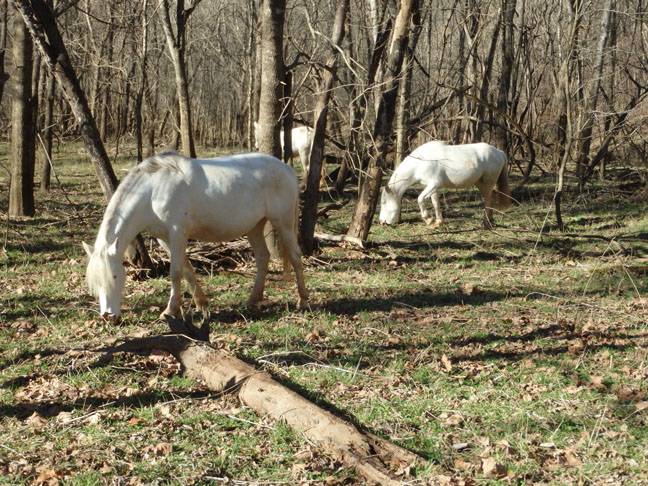 I do not tell the herd’s location, due to harassment by drunken “river dorks” I’ve observed.

I have put-in and taken-out at Butcher Jones Beach and found herds of horses and donkeys grazing among the pick-nik area.
They are so used to people they generally keep watch and leave if anyone starts trouble, otherwise they graze and poop!

The ranger at Cumberland Island used to tell visitors about the tourist with camera running down the road with a wild stallion hot on his heels nipping at the photographer’s back. Seems he tried to get a good picture and got too close. The rangers at Yellowstone tell similar stories of tourists trying to get similar pictures of bison often with deadly results.

Be careful with your stalking for photos.

Really?
ALL wild horses in America are descended from domesticated horses. The native Americans exterminated the American Horse long before Columbus so the only horses in the US today, be they in a corral or the Wild ARE domesticated so all are feral!

So they are feral

Nice flow on the Salt. The horses love the river. Great video.
I can see em from my kitchen window here in Nevada.

The horses on islands in NC are a puzzle to me. They live on and in salt water. That is a tough environment for a horse.
I enjoyed the videos.

The Native American horse evolved through several different species and died out here at the end of the Pleistocene around 11,000-13,000 years ago.

Some of those horses crossed over into Asia and Europe presumably across the Bering Land Bridge. The horses brought by the Spanish were descendants of the horse that evolved in North America. .

I have worked with wild horses during my career, but have never heard the idea that the North American horse “exterminated by Native Americans.” That is a new one on me.

Thanks for these videos and pics! Great way to start my morning!

As to wild vs feral, I am also unfamiliar with the idea that Native Americans exterminated them. But yes with the understanding that at the point Europeans arrived, there were no horses in North America.

If Native Americans is expanded to the time period of early human-type populations that would have been hunting around time time of the original horse’s extinction, which by the way was last I recall not of a size to be ridden, the two ideas can meet up.

The Wild Horse and Burro Act was passed by Congress around 1970. It gives responsibility of managing wild horses on Federal land primarily to the Bureau of Land Management. Horses are considered “wild” under the Act but not as wildlife. They are sometimes considered “feral livestock.” On State of Nevada lands they are defined as “estray horses.”

Wild horse herds increase at the rate of around 40% a year. They can quickly overwhelm their ranges and out compete wildlife. Periodically they are rounded up and taken to holding facilities. Adopting them out to private owners does not keep pace with the amount of horses showing up in pens. there are no kill pens left in the US for horses. For old and infirm horses, that sometimes means a 3 day truck ride to Mexico or Canada.

The overall issue is growth that outpaces adoptions. And awful truck rides. I had a show horse in my younger days and FWIW the argument about kill pens for aging horses is ongoing even there and in racing.

However, I just checked a source on that rate of increase you cited, which I thought was a bit high. Here is a quote from the USGS. "Largely unchecked by natural predators, many wild horse populations grow at rates of 18–25 percent per year.’

BLM article from 2018 says the population of wild horses and burros on managed land has doubled from 2012 to 2018. Which is argued to be straining available resources. But is under a growth of 40% per year or there would be a heck of a lot higher count. Even with adoptions, they have held steady since about 1996. https://www.avma.org/javma-news/2018-09-15/exploding-population-wild-horses-burros-strains-blm

Hi Celia,
The 40 % can be considered their potential rate of reproduction.
In Nevada, mountain lions follow the wild horse herds especially in spring to take foals.
There are no birth control programs in effect which are causing some herds to dramatically decrease their reproduction rate.
Under favorable conditions, good forage and few predators, no birth control 40 % has been documented.

It’s the same for the ponies up on Chincoteague Island in VA. On the northern end of the island they’re quite bold. They’ll come running at the sound of a bag of chips or sit on your tent. We had one tuck in behind us and follow the Jeep down the road.

If you’re lucky enough you will be at the pony pen when they round them up either for the yearly crossing or random veterinary care.