Yesterday, I took advantage of the recent heavy rains to explore one of the lesser paddled streams in the area, one that is only barely navigable during normal weather. The current was only about 3 or 4 knots max, but it’s a narrow twisty braided run, with more than a few sweepers and strainers. Yet, with cautious approaches, I was always able to find a path around them. After paddling downstream a few miles, I reversed course and started navigating the many forks to find my way back to the car.

Once I was within hearing distance of the road wher eI’d parked, I paused to get my bearings, and slowly started drifting ever so slightly into the tips of some tree branches that were dangling about 2 feet above the water. I took a stroke forward, and felt the all too familiar sensation of a strand of spider web brushing my neck just under my chin. Then as my momentum slowly carried me forward, I felt the spider web tense. And then instead of breaking, it kept getting tighter.

By the time I figured out it was a fishing line, I was beginning to feel like I was being garotted, and I could feel the line dragging across my skin. It quickly occurred to me there was likely a sharp hook on the line that was going to get pulled into my neck. Envisioning having my jugular ripped out by a fish hook, I reached up and eventually was able to get enough grip to stop the line from sliding through my hands, spin the boat around, and eventually pull the line and a lure with two very sharp treble-hooks out of the branches. 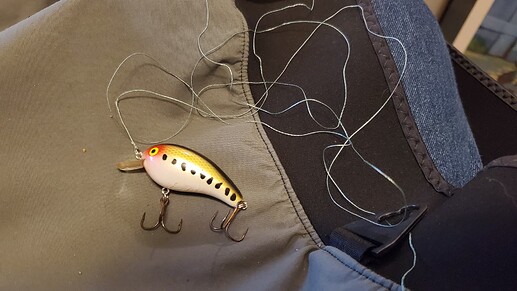 Normally I’m pretty good at spotting fishing line, but instead of the usual monofilament this was a braided line which I suspect made it harder for me to see.

It’s the next day, and I’ve still got red line across my neck as a reminder to stay out of the trees and watch for fishing lines even in slow moving water.

This experience is a good justification for purchasing a quality vest-mounted fixed-blade knife. I used to think the kind of paddling I did wouldn’t require something like that, so I’d just put a folding knife in my life vest pocket, but that was useless in this instance.

On the bright side, it’s a fairly fresh looking lure ( no hook rust), probably run 5 bucks at the store… toss it in your tackle box and take a kid fishing!

Thank you for that early morning shudder. Glad you caught it in time.

Yes, I knife is a good thing to have. But to be of use in most emergency situations it needs to be situated in a place where it is immediately accessible (not in a pocket) and you can deploy it with your eyes closed (your head might be underwater) and one-handed (which rules out knives you have to open with two hands).

Yes, there is a need to be aware of the environment you are paddling in (eg: possibility of fishing line, lures)
*
My daily paddle is in the dark (pre-dawn) in a tidal influenced river.
When I am paddling ‘upstream’, I paddle close to shore. There are many long docks on the river, so I will often go under them to avoid the current.
Not often, but there will be the occasional ‘dangling’ fishing line hanging off docks.
I carry a small light and mini-folding knife dangling around my neck. When/if I encounter fishing line I’ll avoid. The knife is there in case I miss seeing it and get ensnared. The light is to check areas I expect to see line (before going under dock).

As someone who never has been totally comfortable with having a knife on the outside of my pfd, I chose to go with this: 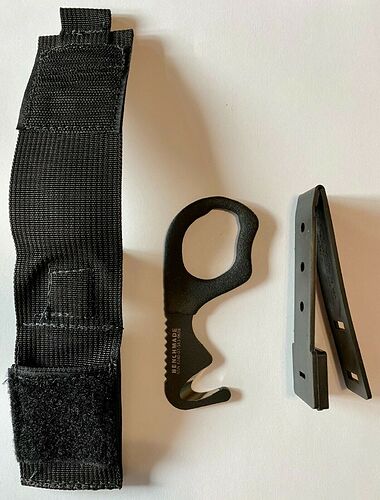 Mine didn’t come with the black nylon sheath like this (not mine - this one has molle attachment) but I sewed one myself and it Velcro’s around the shoulder strap. One handed to open, one-finger to hold and use. Quick access for cutting something like a fishing line or stray net, rope ect.

Several sources for “reconditioned” or used ones on the web for much less $$. Found mine on amazon as “pre-owned” but still from Benchmade. Can’t tell it from new, not a mark on it. Wicked sharp, good grip on handle. For me it meets my need for a quick line/snag cutter. My good folding blade is still accessible in a pocket on a cord if I need it.

Some of what appealed to me:

The less traveled routes have their own hazards. Sweepers and strainers can be bad. Fences can be terrible hazards. Always be on the look out for low head dams and irrigation diversions.

I subscribe to the school of carrying a fixed blade knife on one’s life jacket ready for one hand deploy. It would have helped you in that situation.

Cutting abandoned fishing line is the most common use of my knife. I always take the time to stop and remove as much as I can manage. At the end of the paddle I’ll safely dispose of the line and give any bobbers and lures to fishermen as I don’t fish anymore.

That is the reason I have my Rescue Knife on the outside of my PFD. I have had people ask if I thought I was Rambo. Once I point out that a lot of overhanging bushes have limb lines in them they understand. I don’t go around cutting every fishing I run across, just the ones that catch my PFD.

I put it on a shelf just above where I store all my kayak gear, as a reminder.

I like that tool and might pick one up. It’d be good to have a different option for a situation like the OP’s. I have a Spyderco folding knife (that I can open one-handed), and I’d still carry it, but knives make me nervous.

I was once grabbed from behind and had a knife held to my throat by someone who was flipping out (not because of anything I did, I was just the closest person to him). He ended up cutting my throat superficially but then sliced though the artery in my thumb when I grabbed for his wrist and he pulled his hand down. No fun at all.

Good luck on salmon streams with anything that isn’t serrated. When you get into 50-pound-test superbraid or thicker, you need some serrations to get it to cut. Rapala makes a “Superline Scissors” specifically for this. Scary business you had there.

I’ll have to peruse other threads for knife recommendations, but that Benchmade Hook is a possibility. I’m noticing a lot of sheaths attach to lashtabs, but my life jacket doesn’t have any. Maybe it’s time to replace my old faithful Lotus Designs Sherman? Or maybe I could just glue a lashtab on it…

I have an earlier version of the Myerchin Generation 2 Captain Pro BF300P Professional Captain Rigging Knife. Combination straight and serrated locking stainless blade and marlin spike for undoing stubborn knots. Improvements over my knife are even more corrosion protection, side clip, and onehanded opening feature.

I keep it in its’ nylon sheath strapped to my PDF and tethered with a quick release coil lanyard similar to this which is normally used to secure scuba equipment. It’s very compact but when released extends up to 36" to reduce the risk of losing it. Knife is easily released from the lanyard to use the knife without it.

Still scary sharp after many years in salt water. Not as safe as dedicated line cutters, but more versatile.

Just be glad you didn’t get the hook. One of my compadres had a treble hook off a Limb Line stuck in his neck. The barb was in his neck and partly back out, so i had to push it through enough to snip it off with my wire cutter once we got back to shore.

usual monofilament this was a braided line

The hook is obivious. HOWEVER …Braided line cuts skin. It is a good reason to wear gloves. We’ve also used a form of it to cut pvc pipe. Its more of a friction cut by a real thing thing.

This is so true, braid will slice through skin like a razor. I fish from a SOT but whenever I am out in my sit in style kayak there’s usually a fishing pole sticking out of it. If you do that too make certain that if a fish were to hit and the line starts to run that the rod is positioned in a way that the braided line will not come in contact with skin. I realized this last summer when I was wearing shorts and hooked a big one.
I too always carry a small knife that’s easily accessible. It’s a Kershaw Leek and besides being a convenient size and seriously sharp, it opens with the touch of an index finger.

Yikes, this story of being quasi-strangled is troubling.
I had a paddle pulled out of my hands by fishing line while paddling a narrow connector between Mohansic Lake and Crom Pond in NY. It was left hanging from a tree, and I was able to hand-paddle back to get it so no big deal. But I didn’t like the feeling of being dis-paddled by a tree, so picked up a small knife now mounted vertically on a lash tab. It doesn’t really get in the way, and the clip has not given way unexpectedly. I use it only occasionally, but am glad it’s there just in case.

On my local paddle I will work the tree line on each side and remove abandoned tackle. Because of the river’s rise and fall it is not uncommon to see a hook swinging free at chest height. These are hazards to navigation if you are hugging the tree line looking for shade or avoiding the wind. After cutting the line down, the hooks and metal are separated are stored in a small pail.

After having a painter snagged by a free swinging hook I began this practice.

Half-serrated blade. Fixed blade. Mora makes great ones, made in Sweden, plastic sheath, and plastic handles, made to get wet.