So I have thoroughly burned the family out on canoeing and I’m looking for a solo canoe. I’m 5’7" and 165. I like the feel of my Dagger Reflection 16, but I’m looking for something a little narrower for my reach and more nimble for the twisty rivers here in West Michigan. Not much in the way of rock or whitewater, but lots of logs and logjams. Would like to keep it under 15 feet and 60 pounds. Just wondering what I should keep an eye out for. Not much out there close to me at the moment.
Also would entertain suggestions for a boat I could rehab into a solo boat.
Thanks for any advice.

I don’t have a lot of different canoe type experience, but I love my Wenonah Prism. It’s 16’6" so just longer but even the heaviest version is around 50 pounds. Narrow enough to use a kayak paddle, although I’ve only used canoe paddles. I love mine. I do kinda wish it didn’t have the tractor seat though. I would prefer kneeling.

I know from experience that our rivers are pretty tight for a 16. Just too many tight spots and poorly cleared areas. If I was going to go 16, I’d stick with the Dagger and use a chainsaw and gas can for ballast, lol. I like my Wenonah fisherman, but it’s too wide for soloing well. I appreciate the suggestion.

Since you mention both twisty streams and strainers/log jams, I’m thinking you will probably want something that favors stability and turning ability over speed, long distance cruising ease, and ability to carry great weight in large waves. Whatever it is, at least in terms of what I’ve found useful in those sorts of waters, is something you can quickly ferry or turn into the bank, hop out of it fast (without tipping), and be ready to climb a steep bank to haul around (or take the chain saw to) downed trees. (For me that precludes pedestal seating, but perhaps you are used to and can quickly enter and exit them more gracefully than I.)
So pretty good primary stability is highly desirable. I’m also guessing that you’re looking for something used that won’t break the bank, so I’m not thinking in terms of new composites, of which there are many that would fit the bill, from say, Northstar, Wenona, Swift, Nova Craft, or others.

With that in mind, I think you’d do well to be looking for something like a used Mad River Guide/Freedom solo, or a 14 or 15’ Prospector (Swift, Nova Craft, or ?). A Bell Wildfire/Yellowstone solo would also work nicely, I’d think, though the last is a bit better cruiser and a little less stable initially than the former choices. There might be some older Old Town or Mohawk models that would fit the bill also, but I’m not as familiar with their older models, so I’ll refrain from suggesting anything there. Perhaps there is someone else here who can be more helpful with that.

I wish you well in finding one of these. They’re around but becoming less common. Folks who have them usually want to hold on to them.

I think you have my needs pretty dialed in. Carrying weight really isn’t a concern to me. I understand capacity can breed stability, but it’s just me, a spare paddle and a throwable cushion unless I’m carrying some fishing gear. Even that would be very light. You are correct that I will need some luck/well-wishing. I’ve been looking at canoes intensively in my region for about a month and the solos are few and far between.

I turned a Dagger Reflection 15 into a solo. Not as maneuverable as my Mohawk Challenger solo, but more that my Wenonah Vagabond solo. I use it mainly for fishing. Better yet is My Dagger Legend 15, but it weighs over 60#.

Other than the wood trim this is ideal for Michigan rivers.

Mine is a ‘91 Tuffweave hull with aluminum rails. It’s my primary boat for our woody Michigan rivers. 15’ 9" & around 53 lbs (with current patches). I have the same pedestal seat and also both kneel and sit when paddling.

You are 2” taller and 15 pounds heaver than me but I’m sure you would still fit well in a 13’ Curtis Lady Bug solo if you can find one. They have not been made for over a decade so some might scoff at looking for one. But in the Summer of 2019 I decided I wanted a Lady Bug after just missing one for sale in my city (called the seller 15 minutes after an earlier buyer drove off with it.). I watched ads on here and regional Craigslist and within a couple of weeks found another that was 300 miles away but happened to be within 15 minutes of a road trip I was planning to upstate NY and I picked it up on the way. The canoe was in excellent condition - seems folks who bought Curtis boats take good care of them. Curtis made several solo models and versions are still being produced by Colden Canoe in upstate NY. Mine weighs 31 pounds and has a 26” beam at the gunwales (due to tumblehome, widest hull width is 29”). It’s a delightful canoe.

In fact i may be bringing it along on a road trip from Pittsburgh to SW Michigan next week (to visit friends and family in and around Allegan, Grand Rapids and Muskegon). If you are near any of those places you could meet me and check it out to see if it as a model you would consider looking for yourself. A couple of the folks I will be staying with live right on rivers or lakes so you could try it out.

Nothing better than drawing on the combined decades of experience of other paddlers! We learn from experience. Personal experience is much more expensive than other people’s experience.
Next year I’m going to be scouring the old posts narrowing down a good canoe for solo work hunting. Able to be gone week or more, pack everything in and able to pack critters out. Not sure if soloing something capable of taking hunting camp and an elk out all in one trip is realistic or not, but I’ll bet the topic has been covered here.

I have one solo that I’d consider selling, my Swift Shearwater. It’s 16 feet but very maneuverable. It’s about 40 pounds so lighter than your target. Kevlar and plenty strong for pulling over logjams. Let me know if you’re interested or would like to try it. I agree with rival51 that a composite Rendezvous would be a good choice too (and so would a Curtis Ladybug). Shearwater would be $1300. 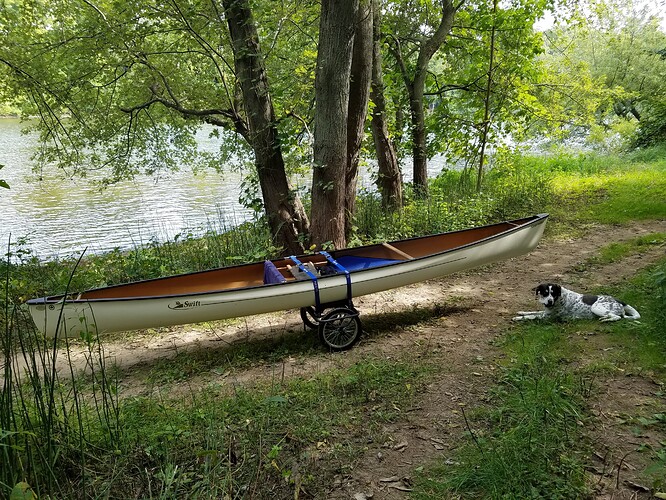 That is a beautiful boat for the money! Probably good you aren’t near North Idaho. Might derail my plans to buy another kayak soon.

An every day canoe and a weeks worth of gear and an elk canoe are two different boats. Either get a big boat and plan on loading it with water jugs etc to get it to behave on the weekends, or get smaller boat that is great most of the time but is real exciting when overloaded.
You can always add weight… you can’t add weight capacity.

Oh I realize that and I’ve got a regular every day boat (or two). Plenty of room for regular camping and well manored when it’s empty. Next year though, something for big loads and manageable.

I think my old Millbrook Flashback would have been perfect for you.27 pounds, old school slalom boat, made up for fragility with maneuverability, and so different from even my similar sized royalex boats due to the lack of weight. If an Explorer is the Ford Econoline, your Dagger the Dodge Charger, a light glass solo is the Lamborghini. Just a thought to ponder. I loved that boat in whitewater, but it could entertain in a puddle. The shearwater above looks great, and enough difference from your dagger to keep both.

I paddled several twisty narrow rivers with quite a few strainers and some weirs when I was in England 3 years ago and half the folks in the local paddlers club that i was out with were using solo Swift canoes. Seemed to be the canoes of choice over there. I was using a 12’ folding kayak I had brought over with me — had to carry it over the weirs but the canoeists just slid down the tongues in their boats.

Unfortunately, I’m heading north for a week. Otherwise I’d be about 100 miles away.

Whereabouts in West MI are you usually?

I live in Ludington.

People could recommend fifty different hulls and they could be excellent recommendations, but you might not find any locally available. So it probably makes more sense to check and see what is available and research those boats.

Having said that, at your size if you are looking for a relatively small, responsive, and very nimble boat, I would keep your eyes open for a Bell Flashfire. Flashfires and Wildfires are available new from Colden Canoe so you can check the specs on their website.

Right now there are about 4 solos in Michigan and more in Wisconsin. Was half- hoping to find one in western UP or NE Wisconsin and pick up on this trip. That doesn’t seem likely now. But the selling season is young…