I have cousins in Pentwater, but not sure if I will be getting up that far to see them this trip (have not talked to that crew yet.). But if you will be up in Yooperland while I am there, it would not matter if I did.

I asked Colden if he would consider starting to building the Bug again but he said the mold had to be rebuilt. He if there was enough call for it he would consider it. I bought one off Dave Curtis 2 years ago but someone varnished the rails which I hate but at least I have the boat. I just bought a Fox 14 from Nova Craft which would make a great river boat. It is made of the new material that is being used instead of royalex. Nice boat.

My Lady Bug, though in excellent condition for her age, seems to have some sort of peeling varnish on the rails. I had a garage with workshop built last Spring so I have a place to work on it and will try stripping it with mineral spirits. What is your preferred wood finish? I need to put something on the worn steam-bent wood coaming of my skin-on-frame kayak too. It’s looking dry. 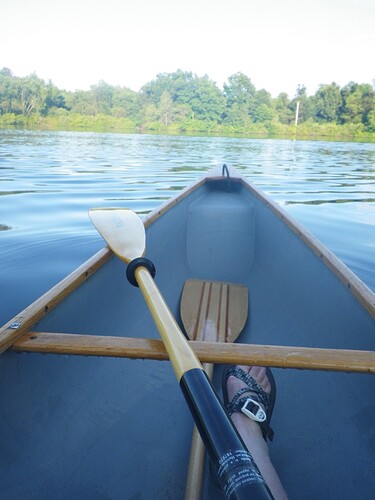 I use either linseed oil or Watco Oil. The oil brings our a nice patina in the wood. You need to do it several times a year which is why people tend to varnish instead. Yuck

The Osprey by Swift is also a great boat for rivers. It is 15 feet with rocker. The Bell MerlinII is good but not the original Merlin.

There is the Old Town Pack which is royalex and 33 lbs. There are some out there you just need to keep looking.

Watco is a durable oil finish and probably what Dave Curtis used originally. He still sells Watco Teak Oil and Watco Danish oil and both are readily available at hardware stores. When I give the wood trim on my canoes a serious tune-up I first sand with 100 grit then 150 then 220 and then apply a few coats of oil finish over 2 or 3 days. You can give the wood trim a decent sanding in an hour or so. Varnish is the most durable finish and surely best for boats stored outside; I prefer the look and feel of an oil finish.

I am restoring the gunnels on a 15 year old Morningstar and found the linseed oil / Watco oil treatments have left a gummy residue. The decks were almost glued on from the build up. Canadians use hemp oil, which is non toxic and has good wood penetration. An old paddler told me he would add cedar oil to his wood treatment to prevent mold.
I have used a mix of hemp and cedar oil (I call Parker Oil after the old paddler) to restore a 20 year old Bell Wildfire. The oil is great to use as a wet sand for a finished look and has a wonderful cedar smell that lasts. So now when I go paddling the boat smells like cedar not refined oil.

I have used a mix of hemp and cedar oil

What is the ratio you are using for the cedar oil to hemp oil mixture?

Based upon your size and the type of paddling you do, the Lady Bug and Flashfire are excellent recommendations. The Wildfire would also suit you well, though possibly a bit larger/heavier than necessary. Another option would be the Savage River Illusion or it’s smaller sister the June Bug. Both were designed primarily for meandering streams but function very well for general touring. The trick would be finding a used one. Both are relatively new to the market.

If you are going to use Watco oil products it is important to wipe off the excess before it dries too much. With Watco oils I have found that it is usually only possible to apply two, or at most three coats in a day. More will just sit on the surface and gum up.

The best penetrating oil product I have used is Deks Olje (D1). This oil had a viscosity or dispersing agents that allowed five or six coats of oil to be applied in one day which really added depth to the finish. It is still available on-line from distributors such as Jamestown Outfitters, but it is rather pricey and seldom available locally anymore.

I have seen a lot of “formulas” for homemade oil finishes and tried a couple. My experience is that they mildew rather badly. I have not tried the cedar oil/hemp oil mixture, however.

I have a Savage River Otegan 16’ look to sell if your interested. Its a great canoe light and nimble. Im also located in Michigan.

I specified used to try to stay under $1,000. Something tells me your Otegan won’t be at my price point. Thank you, though!

Thank you TwoBells. I have plenty of both so will give it a try.
Mark L.

Thank you. Unfortunately back from UP and it’s sold.

“like new” Wenonah Argosy 14 (46 pounds, 27" beam) just posted this afternoon on the Pittsburgh CL for $600. Not far from me (and I still plan to drive to West Michigan sometime in the next month.)

Ok, I’ll give them a call in the a.m. That’s half of what I’ve seen them listed for. Must not be Kevlar?