I bought a 48 inch dog leash to use as a paddle leash on my two piece paddle. Do I attach it in the middle of paddle or on one end?

Tried it when first starting kayaking. Usually tangled up in it when getting out at take out. Quite entertaining I suspect at the boat ramp.

Paddle leashes usually have Velcro at the paddle. None of our dog leashes have Velcro.

Most people - my wife and I included - buy them when they first start out but quickly discard them as they just get in the way and present an entanglement risk when (not “if”) you tip the boat. If you do use one you attach it the middle of the paddle with velcro.

As you have a dog leash maybe you should just get a dog?

True about the velcro. I only bought them as a cheap alternative to the real paddle leashes.

I bought two leashes. I gave the checkout clerk at Petsmart a laugh when I told her my reason for return of their leash was because I didn’t have a dog.

Without Velcro loop or similar l don’t see how you have any control over where the thing is, other that around the shaft somehow. It’ll slide as you actually paddle from end to end. Unless you found one with a loop for a very very small dog.

I also think wonder if 48 inches is too short to allow for proper paffling other than exactly straight ahead.

If you find the cost of one already made up to be off putting, why not a trip to a hardware store or fabric store for a Velcro strip and basic clothesline for the rope.

Though the last time l bought a cat leash it cost nearly the same as my wrist leash. But to echo others above, unless you are dealing with some specific circumstances you are likely,to find it annoying.

For safety’s sake you would probably be best off loiking on EBay or wherever for a cheapo paddle to carry as a spare. That way,you are covered if there is carastrophic damage to your regular paddle, which a leash can’t fix.

I guess I’m in the minority because I like to use a leash when I paddle alone on the Maine coast, plus I carry a spare paddle on deck. Most of the leash ends up coiled up under my forward deck bungee, with about 2 feet hanging free and connected to the paddle.

I may have been wrong then about the 2 ft length.

I do always have a wrist leash around the paddle shaft, so am a fan of the option to be somehow leashed is needed.

But l also see too many new paddlers leave off getting a spare. All it takes is one unexpected paddle break to instantly become a huge arse emergency. If l paddle conservatively, which l do these days, the risk to benefit ratio puts having a spare paddle up higher than the risk of coming out of my boat.

Learn to hang on to your paddle.
Carry a spare, just in case.
Configure your deck rigging to make it easy to stow your paddle when you want it out of your way.
Give the leashes to someone with a dog.

@bnystrom
Any links/suggestions on better/easier stowage? I’m aware of “paddle pants” and the idea of mounting a tube near the bow. Anything else? My Stratos has very tight bungies both near the bow and above legs on deck.

Get a dog, the dog can fetch the paddle…

My work here is done.

Agree that most paddle leashes have Velcro on the paddle, In addition they are usually easy to remove or cut. Some now incorporate a quick release like a tow rig. The big controversy with paddle leashes is the possibility of entrapment in a capsize. I would not use a leash if doing surf landings or white water where there is the possibility of either the boat or you tumbling…

With the type of paddling that i do and the type of leash I use this is extremely unlikely. In addition, I figure that as long as I have hold of the boat or paddle, I have both.

I use a leash similar to this: 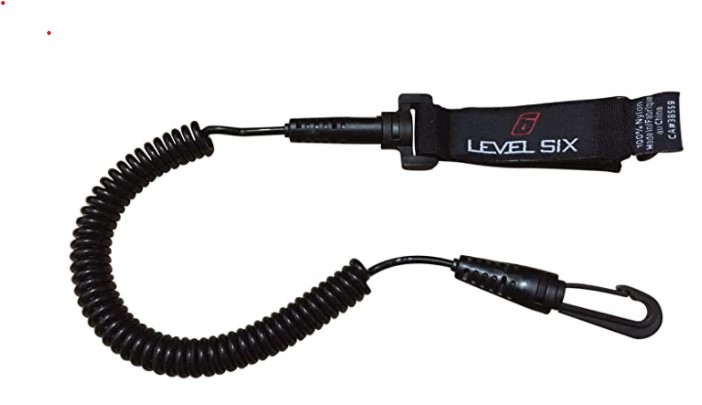 When I need to free both hands quickly like for an assisted rescue or anything else I can just toss the paddle aside and not have to worry about it and keep the deck clear as well.

I have used my leash numerous times while demonstrating wet exits and never had an entanglement issue.

Any links/suggestions on better/easier stowage? I’m aware of “paddle pants” and the idea of mounting a tube near the bow. Anything else? My Stratos has very tight bungies both near the bow and above legs on deck.

I think bnystrom was referring to making temporary stowage of your main paddle easier. Not how to stow your spare paddle (which the paddle pants are usually used for).

Temporary stowage has been a work in progress for me for some years now, and I am not quite there yet, but I can give some highlights:

In my experience, those “phone cord” leashes are the worst of all. They tangle in everything and bang on the deck annoyingly.

If you feel you must use a leash, look online for instructions from making a wrist leash from a sail tie. It’s dirt cheap, very simple to use, and it stows easily on the paddle when you don’t need it. You can also pop it under a deck line and drop your paddle in the water, if you need both hands completely unencumbered.

Allan, you’re correct about my intent and your other recommendations are spot-on. I prefer to use Greenland style cord-and-slider deck rigging, because it’s much more secure than bungee cord, yet releases instantly.

Thanks for the clarification. My mind was going more in the direction of swapping paddles, as I usually paddle GP but keep a spare Euro on deck. Stowing the GP temporarily isn’t an issue but getting it secured longer term is a real hassle.

I used to use a leash but after a few minor incidents caused by it I’ve long since “cut the cord”.

because it’s much more secure than bungee cord

maybe bungee alone, but combined with olive cleats, quite secure.
(paddled many miles in heavy surf entries & exits)
My setup does not ‘allow’ for paddle ‘replacement’ while underway, but easy to take off secured bungee (had to do it once in real situation) 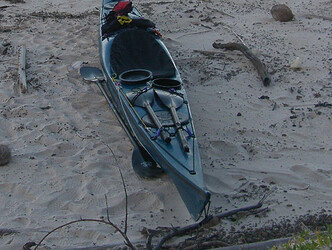 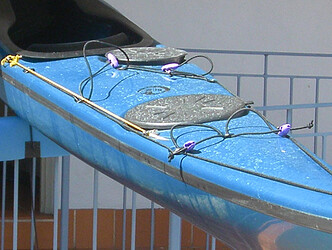 Stowing the GP temporarily isn’t an issue but getting it secured longer term is a real hassle.

Is your GP a one-piece, or can you split it?

Stowing a full length GP is certainly not easy. A lot of people stow it under one of the deck lines near the bow, but that will bring it in a position where it easily catches a wave.

On one of my kayaks, I have made a DIY stowing solution for my euro. It has turned out that it actually works quite well for a full length GP in a way, which was never planned.

I wanted access to my front hatch without having to remove my euro, so I came up with a design with two straps, which I could release and just pull the paddle shafts to either side when accessing the hatch. It turned out that these straps are also near perfect for the GP. 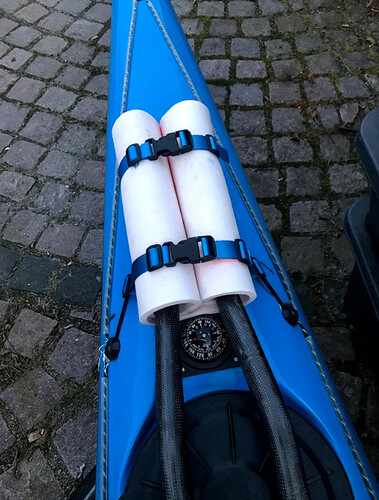 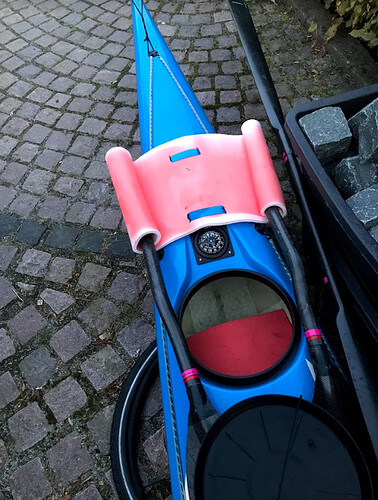 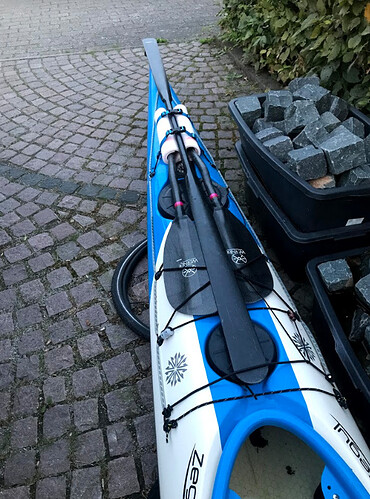 If you have a split GP, I will recommend the yellow pants from North Water. Make sure to get the model with buckles between the two halves, so you can separate the ends as in my photos. I have those on two other kayaks, and they are very sturdy.

Do not buy North Water’s blue model. That model is a joke. I have seen so many of those failing when someone paddles out through heavy surf.

Mine is a beautiful one piece western red cedar I made myself, but I’m lusting after a two piece carbon fibre. My plan is to satisfy this lust when I get the Trak 2.0 owed to me.

I like your solution. I end up sticking it under a bungie close to the cockpit and one up at the bow but it sticks out the front and to the side on that shorter boat. Fine for rolling but it does have some drag from waves and trees/bushes.

That’s why many GP user keep a shorter “storm” paddle on their foredeck. It fits perfectly, it’s easily secured and it’s right at hand when you need it.

As for bungee cord, the fact that it stretches makes it inherently less secure that a cord-and-slider setup. While I do use it at the bow (where it’s just a loop), I use cords and sliders at the cockpit to lock the paddle securely in place. The difference in security between that setup and using bungee at the cockpit is night-and-day.