Thanks for the slightly tangential tips. There isn’t much point to improving things now but Ill be revisiting this sort of thing once I’m paddling that boat.

How about a Scotty paddle leash, find it on Amazon and other places. I find it’s a perfect length retracted or extended. A light weight coil type that comes with a double rubber ring and a rubber attachment strap. A plastic clip on both ends. Also check out North Water leashes and paddle britches and scabbards for spare paddle storage on your deck.

Adjust a coil leash length by putting it under a deck line there’s no banging on the deck. I have a few never had a problem.

Wolf, I am with you. I paddle alone a lot, though in Florida, and use a leash always.

Was an old surfer, so leashes were required there so they don’t bother me.

I recently saw a FB post where someone was looking for a paddle the lost while on a river, of course they weren’t using a leash.

If the river was whitewater, leashes are not appropriate. Even if there was a place to leash it to on full out WW boats, which there is not.
If it was a flatwater river, it is an area of different opinions.

About the only thing that could make a coil-cord leash worse is to add a bunch of bulky, unnecessary hardware. The Scotty wins the grand prize for that!

Seriously, as with most paddling equipment, simpler is best. Here’s the paddle leash made from a sail tie that I mentioned previously. No clips, no hardware, no moving parts, work on the wrist and can be slipped under deck rigging quickly when necessary. It cost less than three bucks to make. 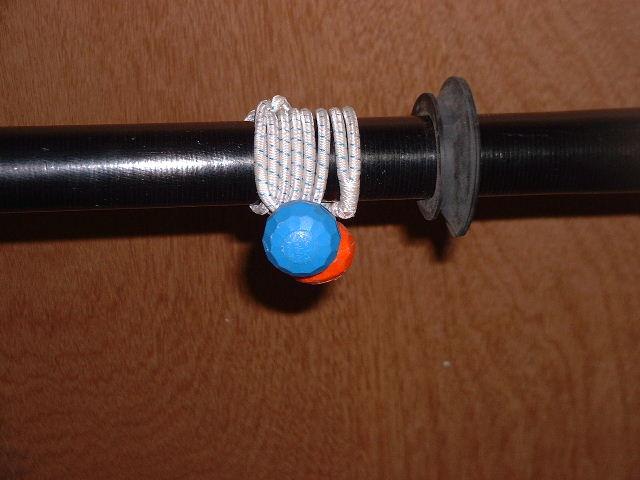 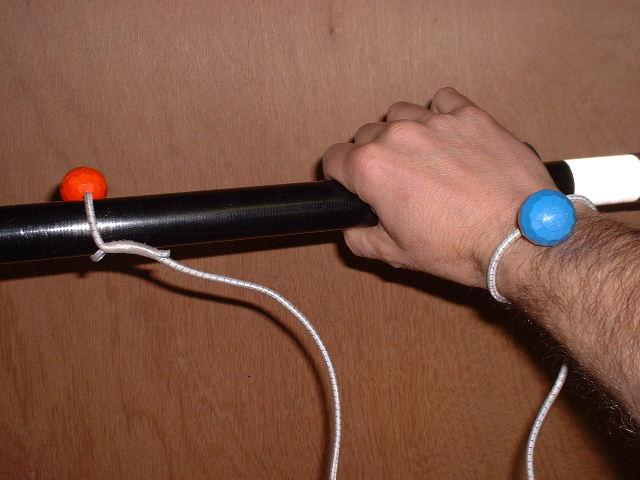 That looks like the leash that I use. Or don’t actually use depending on how that is taken. I have one pretty much permanently coiled on my main paddle and another one or two around in my stuff. My recollection is that we bought them from a small business being run by a couple who were assembling these on their kitchen table.

There were a few people selling them back when I made this one. I’m a DIY kind of guy, so I just did it myself using instructions that were available online. I dug around and found some instructions I wrote at the time:

“Rather than paying $7.50 plus shipping for the Campmor leash, I buy $2.50 sail ties (18” IIRC) at West Marine, which are the same thing, except that they aren’t modified to work as wrist leashes. On the fixed end (blue ball) I cut one side of the bungee at 5" long and whip it to the standing end to form a 4" wrist loop. I then pull the slack through the orange ball until the end is only 3" long and whip that to form a smaller (2") loop that fits comfortably over the shaft of my paddles. It will stay in place when desired, but slides easily with a slight tug. It works fine for fully extended paddle stroke and Pawlawta rolls."

The number of videos of lake and river divers finding paddles is legion.

Well, the question is not really if the leash will help you to keep on to your paddle. Everyone knows that it does.

The question is rather if the leash will help or hinder you to keep on to your life.

Yes, a basic part of paddling is to learn to hang onto the paddle. The obvious aspect of a leash only comes into play if you want to drop it to do something like mess with a camera shot or fuss with a chart/GPS unit. And it can be useful when doing a rescue depending. A paddle on a long leash getting trapped under the rescuer’s boat while helping someone else is not good.

If someone needs a leash to hang onto it in regular paddling they have some work to do on their paddling basics.

The biggest risk is having a catastrophic break, which is hardly common but is an immediate emergency if it happens a mile offshore on a windy day. The ONLY thing that fixes that is carrying a spare paddle, a leash does nothing for it.

I am constantly astounded how many people will go out solo on open water without a spare.

I’m also an avid diver, a PADI Divemaster. I’ve certainly never found a paddle and I’ve not heard of anyone in my circle of diving friends ever finding one.

Plus, I own three paddles, two carbon and one Greenland paddle in cedar. They all float rather well.

Cheapo paddles can go under water, though most that I have retrieved in Maine actually got caught in rocks at a lower tide and did not come unstuck when the high tide came in. In some of those cases there was also water in the shaft, flange got pummeled.

The total count of such found paddles is three in at least a decade, two of which went missing on the same high tide when some campers on a nearby island failed to pay attention to the tide chart.

Here at the 3 minute mark. https://youtu.be/u7OSl6rXc_s And there’s Many vids I’ve watched where paddles are found.

Here at the 3 minute mark. https://youtu.be/u7OSl6rXc_s

3:16: Blank metal. So this is a very cheap paddle with a metal shaft. Probably not relevant for anyone here.

Someone probably threw it away.

Agree w above, not really relevant for most here who are more serious paddlers. The ones who go out in tupperware a few times and don’t mind heavy paddles… I also end up coming back from a lot of paddles with plastic bottles I pulled from the river or the ocean. It doesn’t mean anyone should have dropped them.

When someone is consistently paddling longer distances they find out very quickly that a paddle costing $400 is a lot easier on the joints than the most basic ones. You don’t lose track of those so easily. And none of my paddles from the first most inexpensive ones my husband and I ever got would have stayed on that bottom. They floated. And yes, I see a shiny spot that indicates a metal shaft.

Drip rings are a giveaway too. We never did see the point and finally took them off when we got our first proper sea kayaks.

Like many other paddlers, I experimented with leashes early on, but as my experience grew, I decided that they were more of a potential liability than an asset. I’ve experimented with rolling (and re-entry and rolls) with a leash and they are, at best, a hindrance and potentially pretty dangerous. Another concern is that there are situations where you would want to let go of your paddle immediately. For example, if you were in big surf and got whirlpooled, having the paddle yank your arm around by the leash could result in a serious injury (e.g., to shoulder). If you do use a leash, don’t use it in surf.

I mostly paddle in conditions where if a paddle started to drift off I could rapidly hand paddle to retrieve it. And, in anything other than reliably benign conditions, I carry a spare paddle on the foredeck. If you are going to carry a leash, I’d suggest you try a short leash. I have used a leash that’s maybe 6" long with a loop at one end to slip my wrist through (I think I used a bowline that wouldn’t present any problems pulling my wrist out if need be) and maybe a bowline tied around the paddle shaft loose enough that it could slide around on the shaft but not slip past the blade. This is about as easy a DIY project as there is as it’s just a piece of rope with a couple of knots.

I added a paddle leash along with all the other standard accessories when I bought my first sea kayak in 2002. Never used it once as the more I looked at it the more I was concerned about entanglement. I went through a set of Class 4 rapids entangled and trapped under a raft by paddle tethers on a Cheat Canyon descent in my 20’s so even looking at that device made me queasy. It is currently in a box of gleanings from my overstuffed gear closet to go to my local outfitters’ consignment department.

My backup is usually a 72” sturdy hardwood storm paddle that came with the used SOF I acquired in 2012. Besides easily tucking under the lines without cluttering my decks, and not having to be assembled for use like a breakdown paddle, it is handy to grab for utility purposes to spare my beloved full sized laminated cedar GP from abuses like prying off rocky launches and (less often) deterring enthusiastic dogs or seals from clambering aboard.

For all the haters out there, I will chime in in support of the paddle leash. Given, I am in a surfski. I like it because during a remount I dont have to hang on to it, I just throw it to the opposite side of the boat and climb in. Also I have had to fiddle with my rudder twice after hitting something small in the water (it pushed my rudder into the hull slightly. I cliombed off and bent it back a couple degrees to un-bind it). It was very nice not having to worry about it floating away. Also, I’ve wiped out in the surf zone a few times. When this happens im unleased from the boat but still have the paddle leash attached to my pfd. when I go over about half the time im able to hold onto the boat. Having the paddle leash allows me to use 2 hands to point it back into the waves and remount. The other half the time the boat runs away and gets pushed onto the beach. (this is typically in small surf less than 3’)

In 4 years total of paddling ski and 2.5 years paddling the worst ocean conditions I can find I have gotten ever-so-slightly tangled with my leg leash twice and it took a few seconds to correct.

In moving water I see why leashes are ill advised. In open water I have had basically 0 problems and used one almost every time Im out, from flat water to 9’ 9 second bucking bronco crazy stuff.