Hi. I was recently given an old town guide 147 (three Layer Polyethylene). There’s a warp in the side/gunwale on the starboard/stern area next to the stern seat. Is this fixable? What causes this? See pics for details. Thanks in advance. 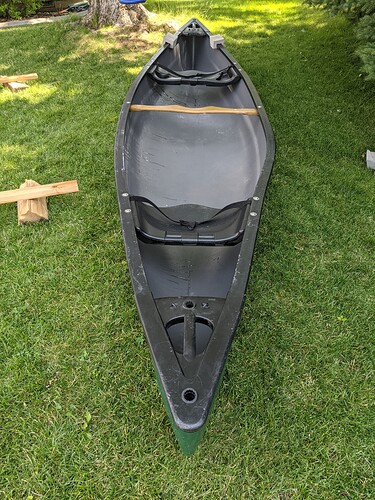 I have the same canoe the OT Guide147, and have done a fair amount of modifications turning mine into a solo canoe. I didn’t think much of it as a tandem and it didn’t solo well from ether seat, so I striped it down to a bare hull and started over.

If I had yours I would start by removing the seats and the center yoke and see what happens. It may just want to pop into a better shape if something bent and is holding it that way.

I can’t tell from the photo if the hull is hogged in on the bottom or side or if all the twist is in the gunwale. Mine had a serious hog in the bottom and I got it out with bracing it from the inside and then setting it out upside down in the hot sun for a week. Some people say real hot water will also work, not boiling but hot enough you can’t put it on your hand in it. I haven’t tried water though. I think the gunwale would react similar to pressure and heat also.

When I had the bracing removed or even before you could trace the shape of the good side to a 2x4 and cut it out and then use it on the bad side and maybe 6-8 C-clamps to help it find its original shape. Maybe with some heat.

If you can get it close and figure out if you want it back to stock or not some additional thwarts could be added to hold it correct.

Take a look at my thread if you want to see what I added to mine. It is a pleasure to paddle now and I’m using a 260cm kayak paddle. Looks like a fun project and I will enjoy following along.

As to what caused it my guess is it was stored hanging from a hook in one place out in the sun.

Yes. You can get most of that out with a 2x4, a large clamp and a couple of small blocks of wood. The 2x4 needs to be long enough to span the whole area that is bent and it probably will need to be laid flat to provide enough strength to pull the bend out . Blocks (about 3", I would think) go at the beginning and the end of the bend between the 2X4 and the gunwale. Attach them with duct tape or nail them to the 2X4. The 2x4 with the blocks is laid against the outside of the gunwale and the clamp spans from the outside of the 2x4 to the inside of the gunwale near the center of the bend (about at the seat bolts). As you crank down on the clamp, the 2x4 will want to twist out. A helper can hold it in place while the clamp is tightened and the bend pulled out. It won’t be perfect, but should be much improved.

Just a word of caution and don’t ask how I know. With loose blocks contacting on corners, clamps and slippery plastic surfaces it is real easy for stuff to go flying as things start moving. Fewer parts the better and then if you feel it needs some over bend you can pad it out a little at a time.

I would boil water and soak some towels to drape over the gunnel. Wear gloves. Keep a hot towel over it until it can be bent some by hand. Then apply the bending let it cool once clamped to shape. You may have to do it more than once or maybe slightly over bend it.

I have used hot wet towels to straighten plastic before. Haven’t done a gunnel doing that. It’s up to you. This is just a suggestion of what I would do. It is more gentle than using a hair drier or heat gun in my opinion.

It might be possible to use both pieces of the 2x4 if you can cut it so you can us it against both sides of the gunnel when you clamp.

You might use a hot towel on the side of the hull too.

I imagine it would paddle OK like is, and I also think it was left hanging in the sun.

Thanks for all the replies and suggestions. I messaged old town too to see if they have any recommendations. It floats and, according to my complete lack of experience, paddles straight. I’ll let you know what I end up doing. Thanks again.

The common way that canoes get wrinkled gunwales is by capsizing and hitting things while swamped.

The materials in your canoe have a lot of memory. The easiest thing to do is live with it.

LOL As it happens I’ve got a badly bent aluminum gunnel, my first ever, I’ve had to deal with myself. Got it as ppine suggested is the common way. This one looks like it somehow got bent outward though - not sure how that would happen… But it did happen and the how doesn’t matter at this point.
I tried the method pgeorg (and pblanc privately) suggested and it got a lot of the bend out. I used “Pony” clamps as you would use for gluing up a table top or door and they worked well. Made it perfectly paddleable and not too offensive aesthetically, but since the aluminum actually tore on mine and was therefore considerably weakened, I contacted the factory and was able to find a new replacement gunwale.

Perhaps you could do the same, if its worth the cost to you.

There will be a lot of pop rivets to drill out (50 on mine) and redo, but it would give you as good a looking fix as possible. Just An option to consider if Old Town has those gunwales still in stock…

I also thought of the advice of if it paddles straight just live with it.

For some people that’s an easy thing to do like driving a dirty car or having empty fast food bags hidden behind the seat. For others living with the side bent in on a canoe would drive them nuts. I kind of fall in the middle and I find somethings bother me more than others. If I have a work truck or a farm truck I work them hard from day one and trucks are to be used. It might even bother me a little to see a truck babied like a show car.

If it were mine I would try and fix it just to see if I could and if I got it pretty straightened out but not perfect it would make me feel good and be good enough.

Having the same canoe and mine wasn’t free but close to it I will say is kind of a good feeling because it became a work truck for me. if I had spent a couple grand on a beautiful light weight pack canoe I would worry about scraping it up and someone stealing it. I wouldn’t be dragging it down a rough launch point or sliding it on a concrete ramp. I like that it’s a survivor and used.

My first canoe was an old Sawyer with aluminum gunwales and it had been wrapped. It was literally straightened by jumping on it. I spent some time putting it back together and pounded on the gunwales at different times until they were pretty stright. A little wavy but no big wangs in them.

I paddled it everywhere for decades and sold it for $400 over 30 years ago.