On Holder’s Creek below Lake Keowee.

Looks like a fine day on the water. Enjoy the colors while you can, I forgot how suddenly they end.

This week has been dedicated to the colors and getting out as often as we can before cold sets in.

My 5th last trip may be 6th last trip next Wednesday. Long range forcast is high 60s with night temps in the high 50s. Hot dang!

Fall found me.
Nights are getting down into the low 20s and high teens. Day time highs in the 50s. We have had 2 snow falls now, but they melted off quickly. In the not too distant future we’ll get the 1st snow that melts off in March or April.
I am still enjoying my daily paddle trips, but I expect the water will be too cold pretty soon and shortly after that it will freeze over. I have thick wet suits top and pants, mitts with pogies and a hood, but once the water gets cold enough it’s just too cold to enjoy. It will drop 2 degrees or so every nigh now. At this altitude it only costs me a week or 2 at most however, because the difference between cold water and ice is not very long around here. Depending on how fast the temps drop I expect to have maybe 3 more weeks to go out. But if we get 1 or 2 nights in the single digits the water will not warm back up even if it doesn’t freeze over. Surface temps in the low 50s or 40s is just too cold for me with the clothing I own. So I think my paddling season it near it’s end for 2022.
So, Thanksgiving and Christmas coming up and I always enjoy them. Then we have the time from January to late march. Short cold days, long nights and wood fired in our stoves with meals cooked on the stove tops. Even winter is nice in it’s own way, but I’ll be looking forward to open water in April again.

Wednesday forcast is near 69°, but water is dropping below 60° on the Chesapeake.

Around 70 in SW MI yesterday and 65 today. Colors seem more muted each day. I’ve lost some weight and I’m not catching nearly as many leaves on my bow as I usually would. 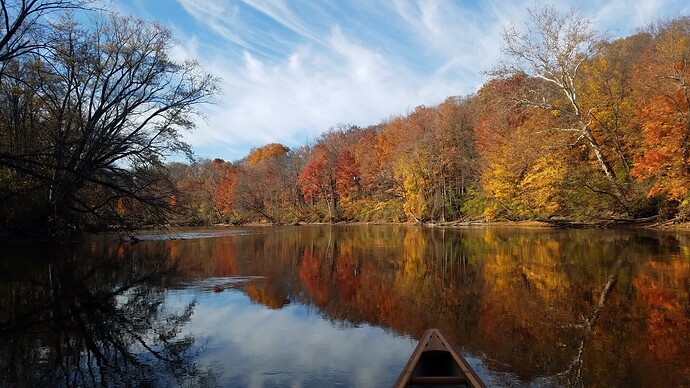 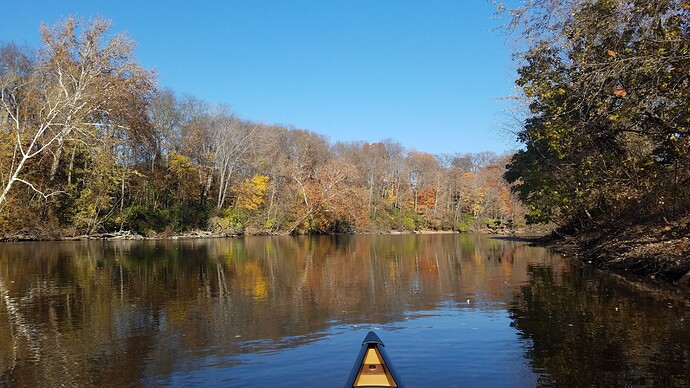 We are forecasted to have almost freezing nighttime temps later this week.

Here’s what our local NWS posted for this weekend: 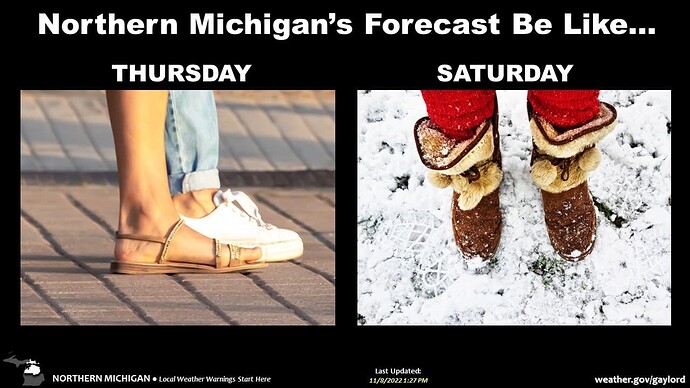 One day it’s the end of summer, as a hurricane comes into FL.
The next day it the beginning of winter, as the white stuff spreads across the northwoods. 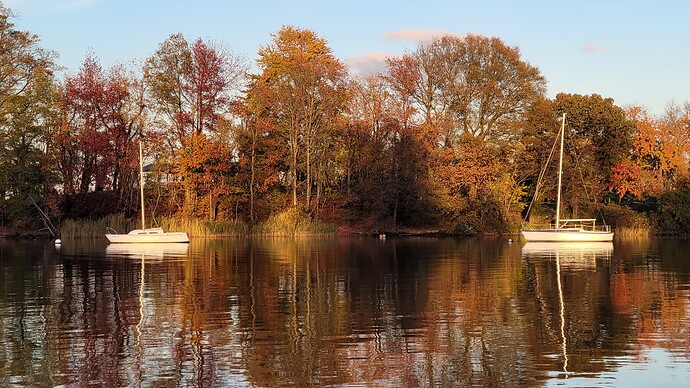 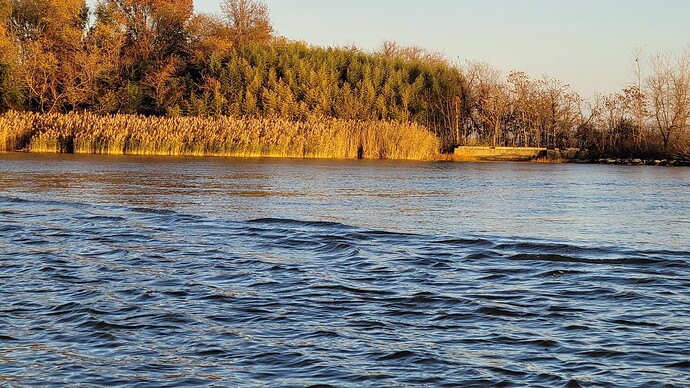 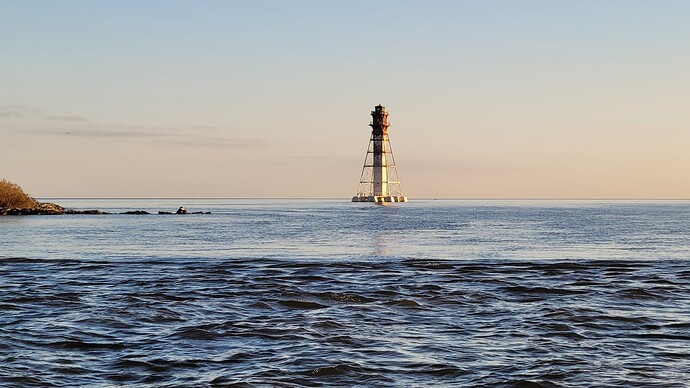 The ripples are where the outflow and incoming tide meet at a narrows between the island and the channel behind the islands.

Nice pics. What does it feel like to cross those ripples?

Similar to Rookie, we nearly tied our record of 75 for today and Saturday we may get lake effect snow but so far November has been a fine month for paddling. 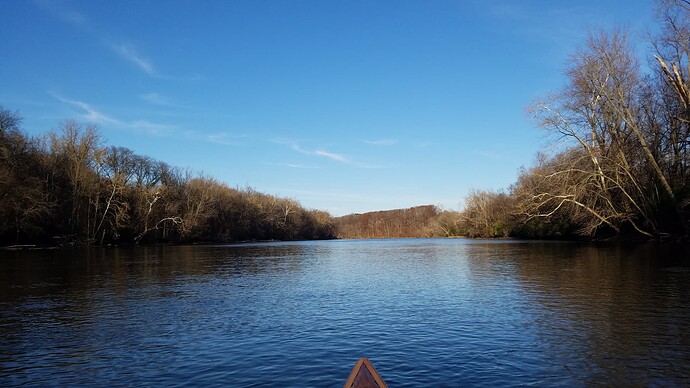 Set a record here of 77F. Forecast of dropping temps and snow, so it was a short morning paddle followed by soap, water, boat wax and 303. Kayaks now in their winter quarters. 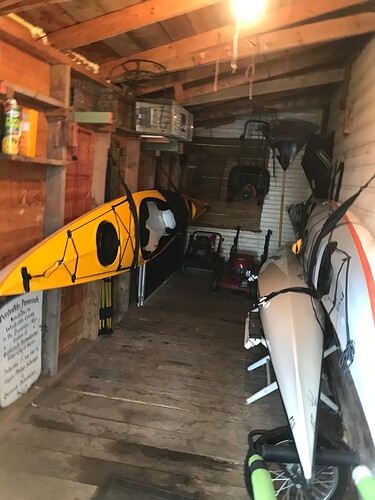 well fall fell. It’s now winter in Wyoming.
It’s 6 degrees now as I write this-------- and getting colder soon.

TomL, its similar to hitting minor ripples in a river. You and I have compared our river and bay experiences. Each body of water has its own intrinsic beauty and challenges. Autumn is a great time on the water. The boating season is over and the waterway earily quiet. Sunsets often leave a golden tone, possibly due to the sun’s reflection off the leaves. The oppresive heat and humidity is gone. There’s a noticable increase in migrating waterfowl, but now Osprey and Herons are long gone, and the last Bald Eagle seen on the past five trips has disappeared.

Wyoming is 6 degrees, you have 75°, and Monday we had air 68°/water 61°. I planned for a Tuesday trip but it dropped into the mid 50°s. Fortunately, yesterday was 64°/59°, so I took my 7th last trip. Despite my handicaps, I finished the year within .16 mph of my best speed from 12 years ago on the same test course. Don’t believe that you can’t match past levels of performance, its just harder. You’re main asset is tapping into a higher level of experience. What’s most satisfying is learning to condistently manage energy for a near flat line whether paddling into or with wind and current.

For new members paddling protected areas of the Chesapeake Bay, the initial impression of the Bay is of a large flat lake - its far from that. The appeal for me is the changing, dynamic nature of the Bay. You can expect current from multiple directions during the same trip. If you aren’t aware of conditions, you might end up going into tidal current on the way out and fight a reverse tide on the way back. Wind direction and strength as forcasted are not always reliable; readings are typically different within visual range. Where you see visual evidence of mild turbulence at the constriction, there will be a noticable change in paddling effort when you enter the turbulence. In open water, you’ll have no idea of the current flow. 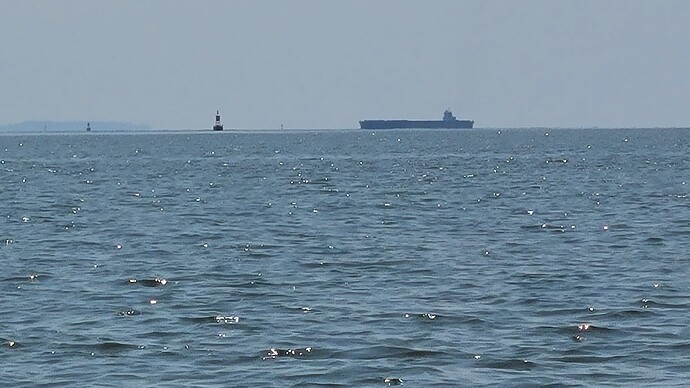 A bouy out in the middle show about a 3 mph flow during ebb tide, but it may turn slack a few hours later during the flood. You can plan a route to ride with it each way or fight it. I often talk about speed being important, while some say speed isn’t everything. If your paddling limit is 3 mph and you try to fight a current of 3 mph . . . do the math. If you paddle at 5 mph, a one hour trip, the day before, could turn into 2 1/2 hours the next time.

During the 1970s, Maryland actually built a scale model of the Bay to study the dynamics. I regret that I never had a chance to visit the model. After the study ended, a few coworkers where I worked surveyed the building to evaluate it as a records storage site. Unfortunately, I missed the survey tour due to other commitments.

The bay also has many brackish water and salt water marshes to explore, which are teaming with natural buesity not seen elsewhere. It doesn’t have to be hard. If you study and understand it. There are several great books that help to understand and appreciate the offerings.

Yup, Fall’s gone!
I went to the lake yesterday and found it iced over. Not just the edges either. Clear across! So I guess I need to go out in spring of 2023. But I am done now for 2022.

So I will find other fun things to do now through the winter season, but “kayaking Ain’t one of them”

My last three trips were late enough in the day, to take advantage of afternoon heating, that I didn’t feel the need to use sunscreen; what a treat not having that unnatural film or the oppressive heat. Sad to hear about the ice, but autumn is a special time to be on the water alone: the solitude in the scene posted by Medawgone in Pretty Pictures - Just Pretty Pictures, contrasted against the serene, spring-fresh greenery of the cathedral-like scenes TomL posted above (how is that possible?).

I don’t have the technical skill to take on big challenges on the water, but by paddling long enough, even the “unadventurous” amongst us will be remind of a similar moment alone, out there, on the water . . .

There’s more to being a member of the forum than sharing technical details.