After paddling October 18, when I took my Cyprus apart and rinsed it I heard water sloshing around in the male end. That made no sense as only the blades have been in the water. I’ve not capsized nor practiced any self-rescues in the past month. Did some research and found some similar cases so hung the paddles, blade up, thinking the water would drip out the bottom. It hasn’t

The ferrule on this paddle had been repaired by Werner in 2016 and it’s worked perfectly since then. Not a drop of water in that shaft.

Today I inspected the paddle closely trying to see if there were any hairline cracks. Could find none but during that inspection I noticed water coming out of the edge of the blade. When I hold the paddle, blade down slightly, drops of water seep out. If I reverse the blade, no water seeps out so it appears to be one specific area. Two photos are attached.

Right now I have it propped up on my kitchen counter so the water can seep out. My thought is to get the water out and then put a thin line of Aquaseal along that edge to see if that will keep water from entering the blade. If the water is coming out of the edge of the blade, it has to be entering in that same area each time I take a stroke. Think this will work?

Yes, I’ve emailed Werner and sent them the photos, but I don’t want to pay for any non-warranty work nor do I want to pay the costs of shipping the paddle to them if I can avoid it. 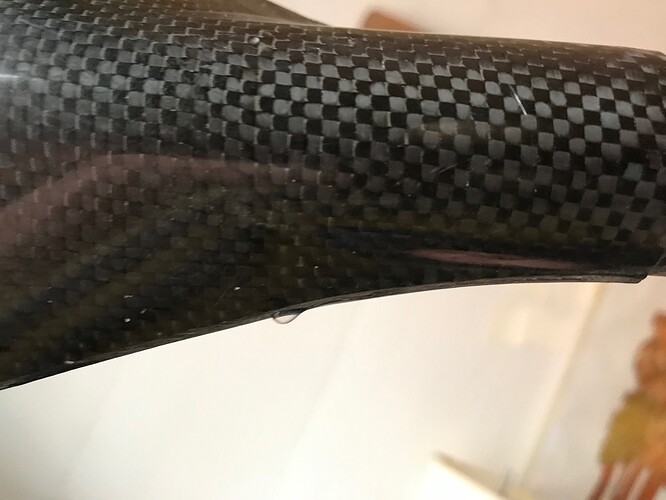 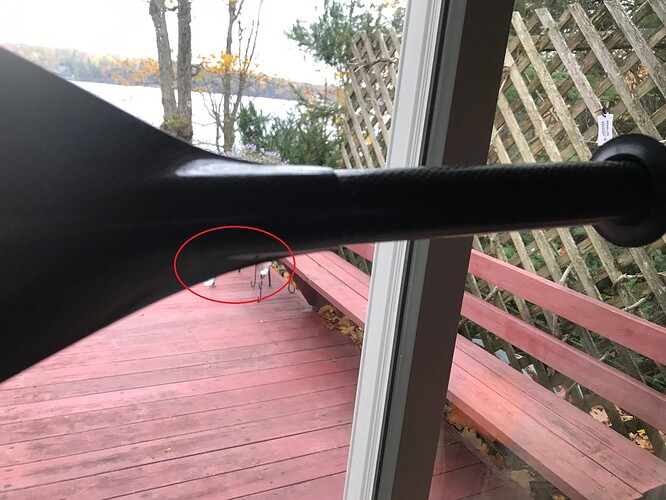 Rookie, follow up by CALLING Werner after a day or so, when they will have had a chance to read your email.

They have always been great at responding to questions. It is possible that the repair would not cost you anything more than the shipping.

Will do. I know they’ll respond by email, but do like your suggestion to actually talk with them. Thanks.

My guess would be that the two halves of the blade have slightly separated. So instead of putting something on the edge to seal, I would try go get something in between the blade halves.

My approach would be:

Warning: I have no actual experience with this kind of problem. So if someone has a tested method, which works, use that instead.

hello,
How to set blade between it?
Is it necessary to seal the edge?

This is terrible advice to hand out without having done it yourself.

If Rookie’s paddle is defective, Werner might repair it at no charge. Best to let them evaluate the situation without throwing in an unauthorized, and possibly botched, repair attempt.

Thanks for thinking about the issue. While I guess there could be some separation, I carefully measured both sides of the seams and there’s no difference. Paddle blade feels as rock solid as the other half. Having left it on the counter overnight, there’s no sound of water inside now but there still is some moisture slowly seeping out.

Does condensation form inside paddle blades?

Acetone is generally used for cleaning before epoxy work but as I’m a fresh water paddler who doesn’t rock hop, there’s nothing to clean since the paddle has always been rinsed inside my home, including the blades.

Rain and very high winds here forecast to stop Thursday evening, so I’ll test it in the water on Friday. Am considering placing electric tape on suspect area to see what happens.

Still a big mystery to me. I know what cracks in gel coat look like since my Prana came with quite a few, but can’t find anything on that paddle. Even if I send it to Werner for evaluation, that wouldn’t be until December at the earliest so I’ve got some time to experiment.

I use denatured alcohol to clean before using epoxy on my boats. It cleans and evaporates. Acetone has more health risk problems. Freshwater or salt water it is the dirt and oils that epoxy doesn’t like. Oils from hands, gloves, and water pollution for example. Epoxy is relatively soft and has no RV protection and not likely used on your paddle as a finishing surface. It was likely a gel coat as you mentioned. They are different.

I suspect the paddle blade is relatively solid. Usually they don’t have that much extra thickness. Any voids in there would be something for Werner to address. I work in wood and epoxy mostly. . As I recall your drip was likley coming from the shaft to paddle joint. Not the blade.

As I recall your drip was likley coming from the shaft to paddle joint. Not the blade.

No drip from the joint. Had that been the case, the water would have leaked out while the paddles were hung blade up. Leak is located on the blade seam about an inch above the joint. If that’s also the point of entry, should be an easy fix.

I suspect the paddle blade is relatively solid. Usually they don’t have that much extra thickness.

I have read somewhere that the blades of Cyprus and Ikelos are hollow, with a foam core. I haven’t tried to open my Ikelos to check, though. These blades do not have the reinforcement rib on the backside, like a Shuna has, so it would make sense that they have replaced that reinforcement with some height inside the blade.

Got a response from Werner. Note included “Our Cyprus blades are made with a closed cell foam so this is likely coming in from the shaft and possibly leaking from the blade area.”

They’ll want $228 to replace half the paddle if it’s not covered under warranty. Think I’ll try my solution first.

It’s possible there is a crack that is not very visible unless pressure is placed on the blade as in the paddling motion. You might simulate the pressures on the blade and carefully inspect for cracks.

Bummer! I had a Shuna that, at about 3.5 yrs of age, began holding water in the shaft. Werner told me it might be covered by warranty but they could not determine that without actually examining the paddle. They did say that even if I had to pay for repair, it likely would cost little—nothing like what you noted.

I sent them the paddle, and they did cover repair under warranty, as well as shipping it back to me at no charge. The repair included replacing the old raised ferrule with a new flush one.

BTW, I finally retired that paddle when it was about 9 yrs old, because I kept hearing a slight creak in it that made me suspect it had a crack. Never could find it, just kept hearing the creak.

@grayhawk Thanks for the tip. Tried pressing on the blade under a strong light. Saw nothing except scratches, all seem to be cosmetic.

This paddle has already made one trip for warranty repair three years ago as the ferrule was defective.

The Werner rep gave me a RA# and told me I was welcome to try to seal it. Told him that if I sent the paddle for inspection, it wouldn’t be until late November or early December. That gives me some time to see if I can track down where the water is entering and if so, try to seal it. Fortunately it’s not a copious amount of water.

While rain and snow is forecast for tomorrow, if there’s a break I’ll paddle here since I still have a boat at the shore. Otherwise I’ll have to wait until Friday. Figure I’ll use electrical tape around the joint and edge where the water was dripping. If after an hour or so there’s no water inside, will try again without the tape. And if that doesn’t produce water, I’ll toss the paddle in the water on the odd chance somehow it is entering through the shaft.

And if none of that produces any water inside the paddle, then my paddle is haunted!

Too bad I can’t stick some Keel-Ezy on it, like I did after filling in all the gel coat spider cracks I found on the bow and stern of the Prana after I got it.

Until you find out what’s wrong it would be good to carry a spare…
I had repaired my Kalliste (totally my fault it broke) and one day the blade fell off.
Then Werner repaired it and has been good ever since.

That’s what I did when my first (of three) Shuna got old and creaky. I had already bought another one (on sale!) and kept the new one on deck, till I decided to just throw away the old one. I did not want to sell or give it away, in case that creak turned out to be a break waiting to happen.

Later, I downsized from 205cm to 200cm, which is why I am now on my third Shuna (and second Cyprus). Yes, I like Shunas and Cypruses,

I always carry a spare, usually my GP but for cold weather i carry another Euro. GP is too wet for my hands when it’s cold.

I had repaired my Kalliste (totally my fault it broke) and one day the blade fell off.

That had to be interesting. Hope that didn’t happen at the catch. I would have fallen out of my boat.

Nice thing is that the foam core blades float and someone retrieved it while I put my spare together.

Hope that didn’t happen at the catch. I would have fallen out of my boat.

I broke the handle off my SUP paddle (at the catch). I punched myself in the face, was off the front of my board and in the water before I could even figure out what happened. If only someone had a

on me, I could have been on AFV!