I called CD (Wenonah) and explained that the gaskets under the hatch covers of my Solstice were detaching, I got the kayak new in June 2016, so I was sort of hoping they’d say, “well that shouldn’t happen, let us fix or replace.” They didn’t say that. So I asked us, what glue I should use. They suggested contact cement or super glue.

Contact cement isn’t the worst suggestion, except you have to put the glued objects together exactly right, because the glue grabs and there’s no fine adjustment or second chance. So, no, I don’t think I want to try that.

The CD rep said they use super glue in the factory. Given my gaskets are falling off, I’m not liking that idea too well, either. 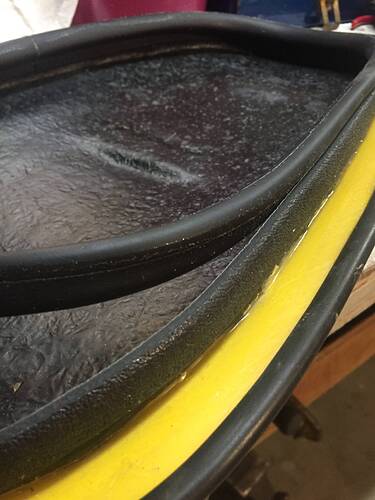 The gaskets are a hollow, oval, rubberish tube, about 3/4" by 1/2", and they attach to a rim under the hatch. There’s no slot or groove. The rim is about 3/4", formed of fiberglass covered by some sort of (vinyl?) jacket.

My friend at the kayak store suggested using Aquaseal. Seems like a good suggestion. Pros and cons? Other suggestions?

Marine Goop has worked very well for me. When installing my backband I had a Tri-Way Lashmate Mini that didn’t adhere. Used Marine Goop to attach it and it’s still locked tight to kayak.

Edited to correct the lashmates are used for my underdeck bag. Goop worked there as well as on the adhesive gizmo for my backband that didn’t stick.

Back when I used to work at a Ford dealership, there was a product specifically for gluing seals and gaskets (like for doors and windows on a car). I remember it was yellow and very similar to contact cement, except that you didn’t apply it to both parts then stick them after curing. You just gooped it up and stuck it back on. It seemed to work well. Check your local automotive store for something similar.

(Edit) Something similar to this one I just found:
https://www.autozone.com/sealants-glues-adhesives-and-tape/weatherstrip/3m-super-weatherstrip-and-gasket-adhesive/249380_0_0

Super glue is about the worst idea I can think of. It’s brittle and doesn’t adhere to rubber worth a damn.

I have also used Marine Goop. Gives you working time and once it cures, is not turning loose.

I used super glue with good results. I have used silicone with good results but like a caulk joint. They have recently changed the gaskets to a new design. I bought some this year for one of the four CD boats I have. Forgot what new design gasket cost buy it’s bullet proof. Have thread here somewhere if you search.

I take pictures if I can later. I hurt my foot yesterday when I was at the launch ramp.

You can see the glue line on old gasket. If you use super glue it’s a nice clean install and you can get it back right where it was don’t pull the gasket completely off it’s easier to align back even if it’s half off. Krazy glue with brush is easiest to use for me.

New gaskets are not hollow anymore and molded as 1 piece.

Or you can use super glue and black silicone where it should never part again. Without being torn to bits.

I think I would go with Aquaseal, or the glue that is used to cement the bulkheads into poly boats. Aquaseal Is kind of spendy, but Lowes carries a 3 oz. tube for about $15. That’s a lot better than $7.99 for a 3/4 oz. tube, which is about typical for stores around here. My advice is to get only the amount of glue that you will need for the job, because almost every glue I’ve ever used is only good for a little while after it is initially opened–maybe a couple of months, or so.

@magooch said:
My advice is to get only the amount of glue that you will need for the job, because almost every glue I’ve ever used is only good for a little while after it is initially opened–maybe a couple of months, or so.

Good advice generally, but I put my last tube of Aquaseal in a ziplock bag in the freezer and have been able to pull it out and use small amounts at a time here and there. You need to warm it up for about 15 minutes prior to use, but you don’t get any of the curing in the neck of the tube like you would storing at room temperature.

I have some in freezer now lol.

Foot is site will try for pictures tomorrow. One kayak is on roof. Need to find left over re style gaskets.

AFAIK Wenonah gaskets are rubber. Rubber contact cement only. Walmart and Amazon have goo.gl/N1oEpz.
No problem doing this. Should be an indication from hatch or deck molding on where the gasket runs. Fitting dry will help get a ‘feel’ for placement. This is not custom or display quality work. Idea is getting it on. All hatches leak. All gaskets fall off.

Weldwood rubber cement works but not as seaworthy as 3M.

Surfaces need cleaning. glue applied to gasket then laid down onto the surface the last original gasket fell off. Tighten cover. The cover/hatch forms should position the gasket into place. Wiggle n squirm assembly as squeezed done.

Remember the assembly is neither artistic not permanent.

No body wants to look at a message. The gaskets don’t have to leak either. There is no fitting dry with the rubber he has that detached.

I hear marine-goop and aquaseal are very close to the same product. I’ll get some goop next time I’m in the HW store and give it a try.

No sense buying those bigger tubes of aquaseal, since that stuff doesn’t store well. I have used the baggy-in-the-freezer method and it does greatly extend the life of the adhesive, but eventually, it turns into a solid hard tube.

Thanks for all the advice.

Aqua seal will get messy slip and slide Krazy glue will not harden instantly like on your fingers you have a minute or two.

I would go with Lexel.