What is this metal thing on my new kayak?

So I recently purchased a kayak off Craigslist. It has this metal hook thing on the deck right behind the paddle rest. I’m thinking it could be for a bungee or something to secure the paddle? But I’m really not sure. Also, do you think it will it interfere with self-rescue? Picture shows it, right behind the cockpit. Thanks. 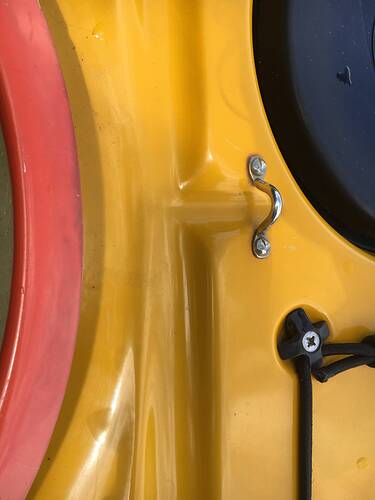 Security lock point. Look at the one way fasteners.

Yup, like Sparky says. I wish all my kayaks had a security point like this (for a cable lock to tie it up when it is on the roof rack or ashore). My Venture has a metal pin embedded in a recessed molding of the deck but this sort of loop works just as well.

(full disclosure, though – I have the tool that can remove those “security” screw heads, though they are among the most tamperproof. Was a project manager for building several prisons so I collected the specialty tools for all the versions of that sort of hardware since my crews had to be able to install them. But I promise to never steal your kayak.)

Thanks. That’s funny, Willowleaf. And I promise never to steal yours! Though your SOF kayak of the same name is awfully tempting.

Maybe you can put a cable lock through that security point and lock your nice new kayak to a cleat on the dock at the lake?

And now I know I can, whereas before I was just wondering why anyone would want to bungee their paddle behind them…

You ain’t kiddin’ old timer. I saw the headline, and first thought was “is it gray?”

I should have caught that as now I recall the forces have a much deeper recess behind the coaming but that same SS Eye over a groove.

Thanks, I’m already really enjoying it! My first non-plastic boat.

So, String & Daggermat, I gotta ask: what’s the reference to the gray thing?

Ah, the immortal “grey thing”. That dates back to a 2006 forum post when the neophyte buyer of his first kayak posted an inquiry as to “what is this grey thing?” under the deck (I believe it was the foam pillar bracing the deck in a rec boat with no bulkheads).

As with any forum that has been around for a long time there are bound to be some long-standing inside jokes. I was not privy to that original string on the “grey thing”, though it can doubtless be located in the archives by anyone with the patience to page through the countless references to “grey thing” that have turned up in strings since. Apparently there was a lot of tongue-in-cheek amusement over the original exchange, and “Canoeswithduckheads”, the Paddling.com poet laureate, has memorialized it many times in his clever verses. Some examples are in this string I’ve linked below from a few years ago.

The references to “Pamlico” relate to another source of forum user amusement, an enthusiastic newcomer to kayaking who insisted that his 10’ WS Pamlico recreational kayak was the finest kayak ever made. (In “Pammy’s” defense, we all tend to feel that way about our first kayak, no matter how basic it may be.)

Thanks, WL. Now I’m in the know. Will make many future posts asking about gray things.

Pammy was the creation of a very imaginative p.nutter who had us all going for awhile.
Alas, he smelled the gasoline and perfume and left us. Pammy that is.
Allegedly.

String: would that “imaginative p.nutter” be related to the “Bob” who just slung chimp poo on you about “emotional support animals” over at the “show us your boats” thread? Or is that another inside joke by a compatriot?

with some posts I am unsure whether to giggle or gag…

Not to my knowledge, in either case.

@willowleaf said:
“Pammy” was not real? I’m crushed. (or should I say “oil-canned”?)
c’mon, next thing you’ll say is that ‘Sponson Boy’ was a fake.
(how many lives could have been saved?)