What the heck is that?

Saw this from a distance today and had to take a closer look. Went up to it and thought it was a fawn that didn’t make it. Then I saw more than one head and wondered how a ball of carp could stay tangled together and die. Then realized it’s just a big pile of steelhead that fishermen cleaned and left behind. That’s a lot of protein and should make the local critters happy. It reminded me of the Steve Martin sketch. 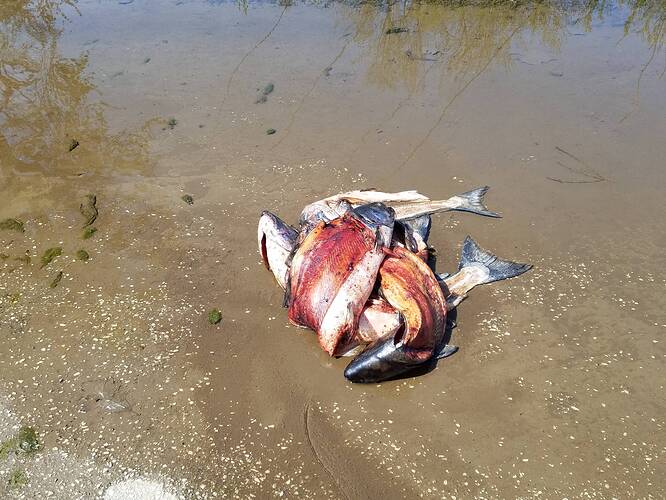 Samurai of sushi,
wouldn’t cleave with such bad taste,
so offal matter awaits a scatter
by diners shorely in haste,

but maybe then since dawn of man
this loafs with fishes manner,
buffets animal in one and all,
save vegans sans katana

I’m surprised the coons, buzzards , or Bald Eagles weren’t all over it .

I don’t fish. Is that standard practice, just to slice, dice and leave what’s left on the shore?

Reminds me of the time I saw a couple of dead sharks on the beach. The fins were cut off; no other meat taken. Just the fins cut off.

String - I think it was very fresh…didn’t smell a bit. If we get out for a short one today I’ll be curious to see if it’s still there. I think the limit is 8 and I did see a fisherman nearby that left right after we arrived. Still seems like a boat came in to dump since that’s a big pile of fish. Maybe the critters couldn’t tell what is was either.

Jack - is that a fish guts yuk or a Steve Martin is funny yuk yuk?

Rookie - I don’t fish either but no no no no no that is not standard practice. Once again the vast majority of people are good but there are a lot of people out there.

Rex - I’m glad I didn’t see those sharks because that kind of thing breaks my heart and it would be hard for me to forget that image. At least in this case it looks like the fish will be eaten. Maybe the lead in the fish makes people stupid.

Rookie—In WA state, many times fishermen had dumped fish entrails right in the water. In small ponds. I can’t count how many times after rolling my boat, my wetsuit and even my skin reeked of the oily-fishy water. One time I was lucky enough to unknowingly smush a rotting piece with my hand when grabbing the boat. Multiple washes with detergent only made a dent in reducing the stink. Nasty trashy so-called fishermen. My husband, who fly fishes, said this is NOT good etiquette.

In CO, some reservoir mgmt agencies specifically state that offal should not be put in the water but into the provided trash bins. At the largest reservoir (federal) in the state, the main marina even provides fish cleaning stations: big stainless steel sinks and disposal containers.

Rex—The shark fins being cut off might have been done by criminals selling dried shark fins to the Chinese cooking market. Shark fin soup is considered a delicacy, but the “harvesting” was made illegal a few decades ago. I remember it being eaten at a Chinese New Year’s banquet when I was very young. No, I did not taste it. Not the birds’ nest soup, either. And before TsunamiChuck jumps in about dog’s head, there was no such offering, or monkey’s brain, either.

So what do we think happens when fish die of natural causes in the lake?

When I was growing up on the coast of FL many saltwater marinas had fish cleaning tables over the water. The remains didn’t stay there as the tide would flush it away, and crabs consumed it I would think.

Really lazy and poor manners to leave the fish remains near public access, on the beach, or at a parking area. It leaves a bad impression at the very least, and if not consumed by a hungry critter can rot and smell.

I once gutted a deer I took with my bow in FL to allow the body to cool down faster. The gut pile was left in the open on the edge of a clearcut. While gutting the deer i saw a number of buzzards in the sky. It was a long walk back to the truck and I figured I should pull the deer back into the woods and cover it with saw palmetto leaves to try and keep the buzzards off it while I went for the truck. When I got back 30 minutes latter buzzards flew up from the remains which was about half consumed. I loaded the deer thankful I had hidden it, and took it back to camp to process. About 3 hours later when I went back only the stomach contents were left. Gut piles here in the southeast are consumed by the next day even in a wooded area. I have seen this numerous times.

Mama nature is setup to handle the death of an organism. Should we send it to the dump, or let it become part of a cycle of renewal? I think it depends on the location as to whether one bags it as garbage, or treats it as feed and fertilizer to be left were its nutrients are returned to the land and organisms that require it for survival.

@pikabike said:
Nasty trashy so-called fishermen. My husband, who fly fishes, said this is NOT good etiquette.
I totally agree!

Nature includes wild animals dying of natural causes, usually in numbers that are kept in balance by other natural factors.

The problem with fishdumpermen is that they overload the environment with entrails, dumped where their lazy azzes feel like it, which usually means in shallow water near shore, or on shore itself.

We have problems in my county with huntdumpermen cutting what they want from shot animals and leaving the plentiful remainders on either public land or OTHER PEOPLE’S private land. Anywhere but in their own property! And they are too cheap to pay the county landfill fee, where such offal is accepted as waste. Some farmdumpermen also leave whole dead livestock in places that are not their own property.

The scavengers can only eat so much, and if the animal was diseased or poisoned, they won’t touch it.

@castoff said:
So what do we think happens when fish die of natural causes in the lake?

When that happens here at home, I put the dead fish in a bucket and bring it up to my garden where I’ll bury it. Good fertilizer.

@Rookie said:
If picking up some species of fish that have died naturally or otherwise be careful to know the fishing regs as there are many that have size limits. If caught with one outside the legal size bracket there could be a fine. To have it in your possession you may also need a fishing license. Some states to transport a dead road killed deer you would need a hunting license

It’s illegal to poison fish or game, and certainly illegal in sport fishing and hunting. Some western States still allow the use of poison to kill coyotes which I feel is a bad policy, Almost everywhere allows poisoning of rodents. It’s precisely the sick, crippled, old, and young that predators are most likely to prey upon. Neither case fit into this discussion of sloppy etiquette and repulsive behavior practiced by some sportsmen. I find such behavior as objectionable as you do. Nor do I believe in the use of poison to kill “Varmints”.

The primary scavengers (buzzards, crows, and coyotes) here in the south have no problem dealing with animal remains. What is missed still decays very quickly feeding insects like yellow jackets, beatles, blow flies, ants, and also bacteria, and fungus. We own 60 acres of farmland returned to forest. The remains of deer I process goes there where it truly belongs not a dump. So I know first hand how quickly it cycles back in the web of life here. In the cold north remains may last much longer, but come warm weather I would think the same thing happens as here in the south.

"…here at home, I put the dead fish in a bucket and bring it up to my garden where I’ll bury it. Good fertilizer.

@Rookie said:
When that happens here at home, I put the dead fish in a bucket and bring it up to my garden where I’ll bury it. Good fertilizer.

You have redefined “fishing”.

Guts last much longer in the dry SW. When huntdumpermen drive over and dump most of an elk and two deer along the road and inside our property within a few days (has happened), the scavengers cannot keep up with the rotting plethora. Remember that those are in addition to the normal kill that happens without people dumping. It doesn’t matter how many acres, or hundreds of acres, a property is, if it gets overloaded.

This is illegal dumping. It is private property and public road. We do not allow hunting on our property. It would be one thing for a hunter to leave the guts of one kill on his own property, but an entirely different thing to stick it on someone else’s property.

There is a big difference in the West vs. the Southeast as noted.
The SE is a very biologically active place. Years ago, someone here got bent out of shape because I said I tossed orange and banana peels in the swamp while paddling. I still do.
What really irritates me are the refrigerators and tires. And plastic diapers.

"…here at home, I put the dead fish in a bucket and bring it up to my garden where I’ll bury it. Good fertilizer.

In the Florida panhandle I’d do that and the coyotes would dig it up. Good yotes I never found any bones.