Why is the first paddle of the year always...

WINDY? Classic start of the new paddling season: Bright sun, blue sky, warm spring temps, light wind that amps up in the second half of the trip, throwing cold spray on wrists and hands and making them ACHE even though they were fine just before that. Body felt fine after 4.5 months off the water. But I always begin the new season in the little WW boat and only paddle the long kayak after at least a few of these “break in” paddles. I don’t like starting right in with lifting a boat that weighs not much less than 60 lbs.

Short?
When I forget to bring something important, like maybe the paddle?
Best gotten out of the way?
A time to think, “I am out of shape”?
Fueled by lots of snack stops?
The time I find a hole in my bootie?
An excuse to celebrate?

I’ll roll and brace and play in the pool early on but actually loading up and going is a lot of work. This year will be different. More birding from the boat. Sooner.

Windy because of the pressure gradient from cold water to warm land mass… Its most pronounced here after ice out… Which won’t happen for a month. Usually there are two days of glass calm and then the mixing roiling starts and as the water warms it turns over exposing more cold water. This nonsense can last for days.
As I get old I don’t regard 36 ( our high temp so far this year) quite warm and we still have a lot of snow everywhere.

I paddle some every month of the year here. So January is also my first paddle of the year.

… only a few days after the last paddle of the year before?

This year the first paddle of the year was in early January since it was in the mid 50’s in Michigan due to climate change…but that does not ALWAYS happen. 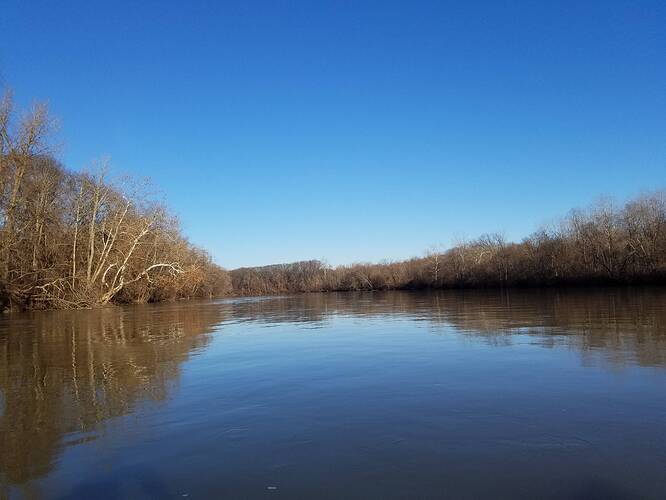 That climate change appears to be staying well south as we still have two feet of snow on the ground, lakes still frozen, and snow forecast this weekend. Only paddles here may be the snowblower’s. 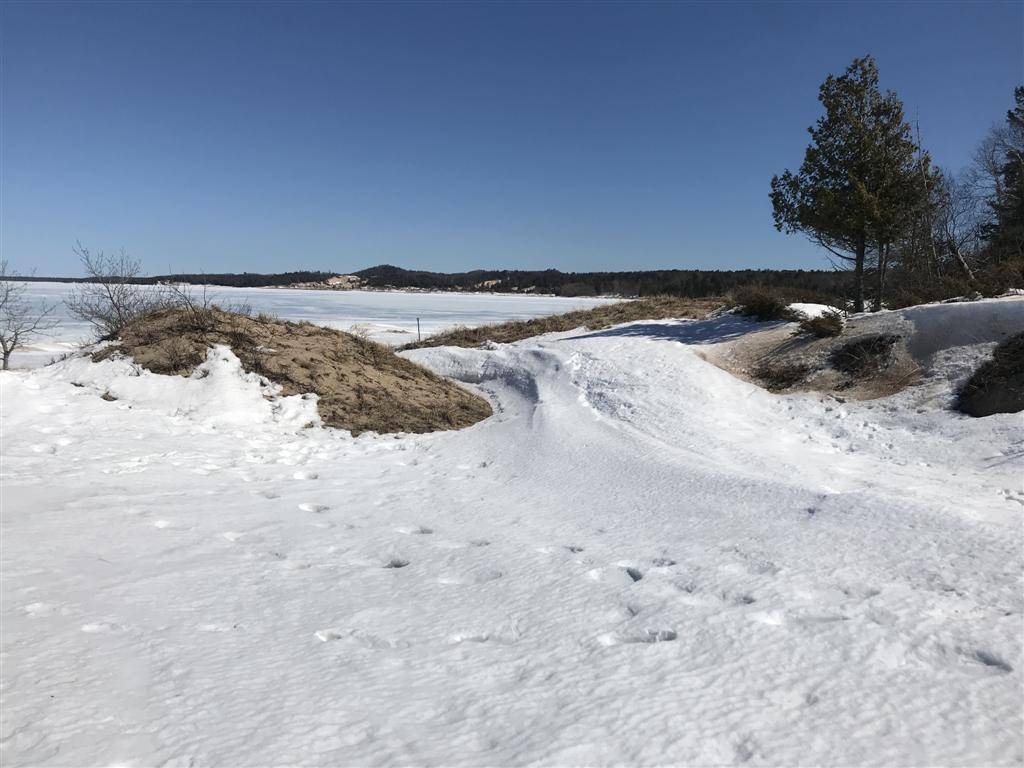 @Rookie said:
That climate change appears to be staying well south as we still have two feet of snow on the ground, lakes still frozen, and snow forecast this weekend. Only paddles here may be the snowblower’s.

It’s pretty, but so is the green in our yards. Trees are starting to leaf out.

Springtime in the Rockies - March is kite flying month in the Mountain West.

@Rookie said:
That climate change appears to be staying well south as we still have two feet of snow on the ground, lakes still frozen, and snow forecast this weekend. Only paddles here may be the snowblower’s.

The weather forecast tonight said that all of April is supposed to be exceptionally mild so you should be floating around soon.

April is coming.
How about that?
Please take a paddle
to where the ole man sat.

Well Rookie, it seems like we’ve been getting weather forecasts that are too optimistic. Right after I hear about the mild April from our favorite weatherperson the temps went right back below normal. Yesterday was mid60s here and supposed to be sunny all day but the sun didn’t come out until 8 pm. Today was our first shot at hitting 70 and it looks like we may not get there…and it’s already 2 weeks late. Then cooling down again this coming week.

On the bright side I do see signs of melting in your pic, plus some dry pavement, plus an exceptionally nice canoe cart. And your kayak looks ready…it actually looks suspiciously clean and shiny.

Spring is wide open here. Yesterday I fell asleep sitting in the sun. I was waked up by a yellow jacket buzzing in my ear. Got a little pink in the face from the sun.
Today it is partly cloudy and just right for a t-shirt.

On the bright side I do see signs of melting in your pic, plus some dry pavement, plus an exceptionally nice canoe cart. And your kayak looks ready…it actually looks suspiciously clean and shiny.

Pushed the wrong buttons and accidentally deleted my post. Yes, it is melting. Slowly. The orange rod was buried a few weeks ago That excellent cart made quick work of moving the kayak out of a gated storage area, then through two doorways and into the parking lot. Twice. Boat’s been hibernating since late October. Needs to get wet and dirty.

However, the NWS up here warned us “Strengthening Storm lifting toward the Great Lakes… A storm system lifting up into the Great Lakes during the upcoming work week, could bring another round of mid-April wintry precipitation to northern Michigan.” 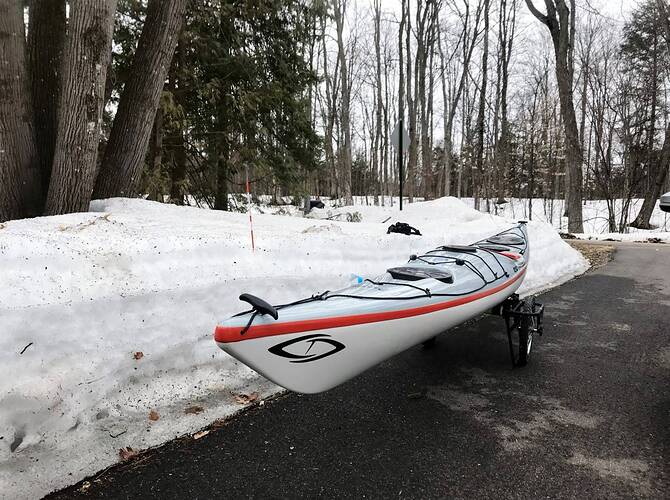 We had an excellent day for paddling on Saturday. It didn’t get too warm (low 60s by take out I think) which was good as I wore the paddling suit figuring that we would have a number of log jam portages & there was a good chance that I =might be in the water helping people get in & out. didn’t need to much as I was mostly sweep. I did need to wade in to help pull a rec kayak along a log when she didn’t have the angle & speed to make the bump over. A big trip - 15 paddlers - with 6 portages (8 for a few). No one got their hair wet. 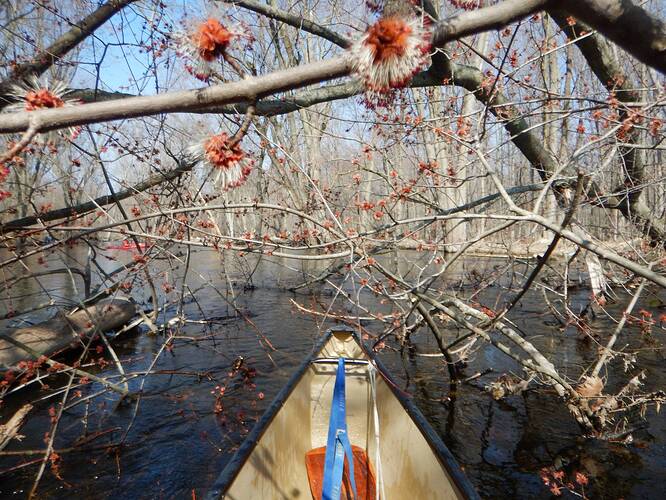 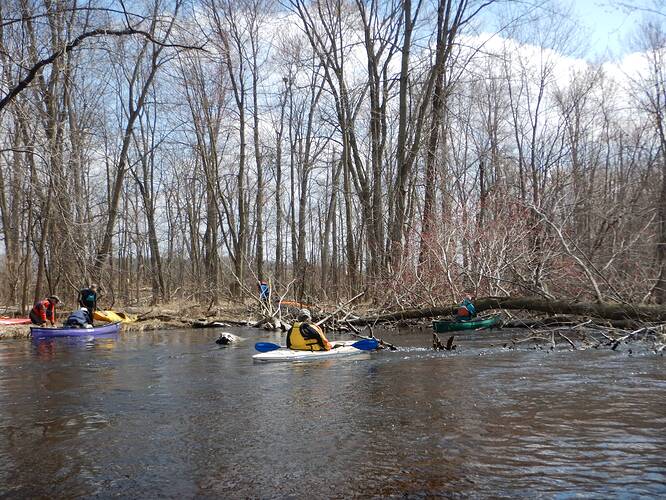 Today was the fourth paddle so far, all of them windy.

But the last two times, I encountered loons on the water. Each time, I swear more birds are joining the avian return here. I eager await the time when snowmelt feeds the little res enough for me to paddle down the arm ONLY accessible during high water. There are masses of cliff swallow nests off rock undersides, and a little shallow riffle bubbles down the stairstep rocks upstream.

Soon the big res opens for the season, too.