Wing VS Euro VS Stick

I’m going to be spending a bit more time on my sea kayak and have started to consider what the best paddle would be to use. I have a solid understanding of how the wing paddles work and also some of their limitations when it comes to maneuvers, I have much less understanding of the advantages/disadvantages of the euro vs the stick. Anyone have some insights to share? Do the euro and stick both function best with the idea of locking the blade in the water and pulling the boat past? What besides less shoulder fatigue are the benefits of the stick? Do they have any weaknesses I should know about?

I assume you mean Greenland paddle when you say ‘stick’. I switched from the Euro to the GP when I found out that I could roll much better with it.

I learned to roll years ago with a Euro blade and never used anything else–how does the Greenland work better for you with the roll?

Greenland paddles have a lot of flotation (more than most euro blades) and the angle of the blade is a lot less important than with a euro, which makes rolling a lot easier. You are a lot less likely to hear of someone having a problem with diving blades during their roll with a GP.

On the flip side, accelerating and bracing is generally easier for most people using a euro blade. For some, even maintaining a higher speed is easier for a euro, until they learn how to actually use the GP (learning things like canting blade and such).

Most GP paddles allow you to, or require you to up the cadence if that is your thing.

GP are not equal. Mine has a 4" wide tip. Most are narrower. My blades have more sq inches than wife’s euro blade.

Are you going for speed? If yes the Euro may get you there faster in terms of getting a really good stroke. There are subtle diffs in how to use a GP, like learning to like a diving angle, that may feel less comfortable at first.

I suggest that whatever you do you also get some work on the basic stroke. Your description doesn’t sound like you are accounting for torso rotation or pedaling, both crucial to a good stroke if you want speed. And efficiency - if the paddle is going beyond your hip in forward stroke you are going too far.

The Wing is the racers choice. It was designed for it. The maneuvers done with it are about the same as any other paddle, just slight style difference. {it is only limited by the paddlers knowledge} The Euro is best in Whitewater and into rock gardens and shallow rivers. The Greenland paddle is generally a distance touring paddle. All these paddles cross over into the others territory depending on the skill of the wielder. Generalizations such as cadence differences from one paddle style to another are only dependent on the size of the paddle not on the class of paddle.The three paddle styles each require a slightly different approach as far as stroke and bracing. To get the most from any of the paddle styles a person should at least connect with some stroke instruction from a reputable instructor. Most all rolls can be done with any of the paddle styles. I paddle Lake Superior and have chosen to paddle with a Greenland paddle, however I have used each of the styles of paddles, I just enjoy the feeling of a Greenland paddle and the way it interacts with the water. Others like the interactions of a different style. Just as there are differences between the different Wings {or Euro’s} There are differences between one Greenland paddle and another…Enjoy the search for YOUR perfect paddle.

Rolling with the GP… yes, the paddle is by nature indexed so I always know the angle of the blade. No more diving paddle. Also, the ‘bite’ or ‘purchase’ or ‘lift’ you get once you learn to scull with it is great. Maybe some folks can get that feel from their Euro blade but I learned it with the GP. It was Jaybabina that wrote something like ‘when learning to scull with the GP, push the blade forward in the water then backward. Repeat a thousand times.’ Still good advice.

My big negative with the GP is that none of mine break down into two pieces. Kind of a pain to transport compared to the Euro.

I also learned to roll with a Euro paddle but when I was introduced to the GP my roll improved a lot and quickly.

One more virtue to note; on really blustery days there would be times when a gust would nearly yank the Euro out of my hands. For whatever reason that never happens with the GP.

I made my Greenland paddles to be Travel friendly

I disagree about being faster with a euro. A wing is faster though. Rolling is much better with a GP. I can roll with both but the euro is very catchy with the scoop design. Sculling is way easier as either way you sweep you get the same lift unlike a euro. If you use feather angle all the worse for rolling a euro blade. Like a butter fly roll with 45 degree feather angle wont work very well. Can I do it sure. But I don’t really need any paddle so even with the poor lift I still roll but easier with a GP. . I go surfing with my GP. I only use a euro for creeks and white water type stuff, zero feather. . I was teaching a guy, kept diving his paddle, put a GP in his hand started rolling very quickly. I see no reason to ever use a euro except what i said for whitewater for sure.

I’ve also made myself a few travel friendly Greenland paddles in carbon, to keep it light and strong. 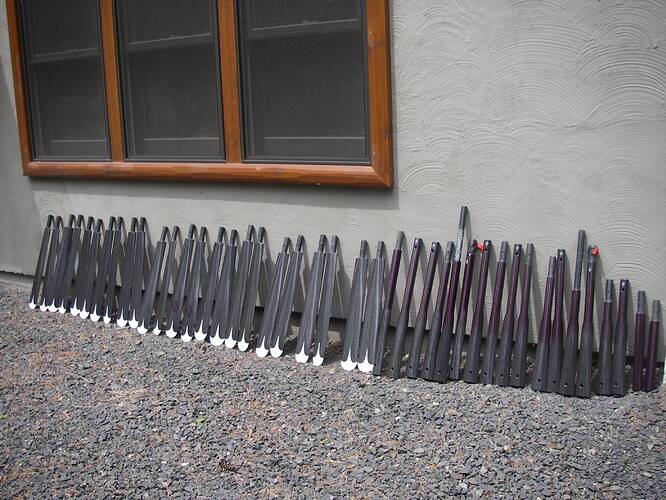 Yes! Bang 'em into the rocks and you don’t have to sand out the dings. Beautiful.

Getting a better idea of what the GP offers–Thanks.

Based on what I’m reading, I suppose that the Euro or the Wing might be the way I prefer to go. I’m more interested in using a similar stroke to what I already use with a wing blade. I’m not looking for speed per se but I would like to use good form and simultaneously be able to maneuver well.

Do the Euro blades have any advantage over the wings? How does the Euro compare to the Wing in terms of locking the blade and pulling the boat past the entry? Does it tend to slip?

Wing is faster because it has more forward pull. From what I have read.

Do the Euro blades have any advantage over the wings? How does the Euro compare to the Wing in terms of locking the blade and pulling the boat past the entry? Does it tend to slip?

All paddles slip, it’s the nature of the fluid medium. Lack of slip is a perception, not a reality.

Euro paddles are drag-based, so less slip is desirable, but will always be there.

Wing paddles work by slipping - the relative flow over the blade face is what creates the large lifting force on the foil. The component of lifting force in the direction of boat motion is what adds that extra something to the existing drag force.

GP can be used as drag-based paddles, or by canting properly can generate some lift as well. So slipping may or may not be desirable.

All GP are not created equal - it takes a nicely made paddle to be satisfying to use, in my opinion.

When paddling I watch where the paddle enters in relationship to a bubble or something floating. I am amazed at how little my ikelos does slip.

@PaddleDog52 said:
When paddling I watch where the paddle enters in relationship to a bubble or something floating. I am amazed at how little my ikelos does slip.

Fair enough - the shaft of the paddle at the surface may not slip much, but the blade at depth slips enough to produce the vorticity that is the evidence of propulsion. Slip is what introduces vorticity into the flow from the paddle. If no vorticity is introduced, then no drag is produced and no propulsion is provided.

Euro paddles are drag-based, so less slip is desirable, but will always be there.

Wing paddles work by slipping - the relative flow over the blade face is what creates the large lifting force on the foil. The component of lifting force in the direction of boat motion is what adds that extra something to the existing drag force.

So you’re saying that a wing paddle works by slipping? The “catch” is the term used to describe the initial entry of the blade into the water. Followed by “locking the blade” and then pulling the boat forward beyond the point of the entry of the blade. I understand that fluid as a medium is not a solid but isn’t it intended at the catch and lock to function temporarily as a solid?
After the catch, the wing moves through the water, changes position and slides out at the exit; is this what you’re talking about?
So are you saying that the blade at the catch “slips” through the water or grabs the water and pulls the paddler forward?
And as far as fluid as a medium; isn’t that relative to velocity and force applied? If someone jumps from a rock 6 feet above the water wouldn’t the impact be markedly more “solid” if the same person belly flopped off a bride at 100 feet?