How do you mount/store your kayak?

That’s a T@B 320 S Boondock by NuCamp. Perfect for the two of us. Small enough to get it into the campsites on the water that we like. 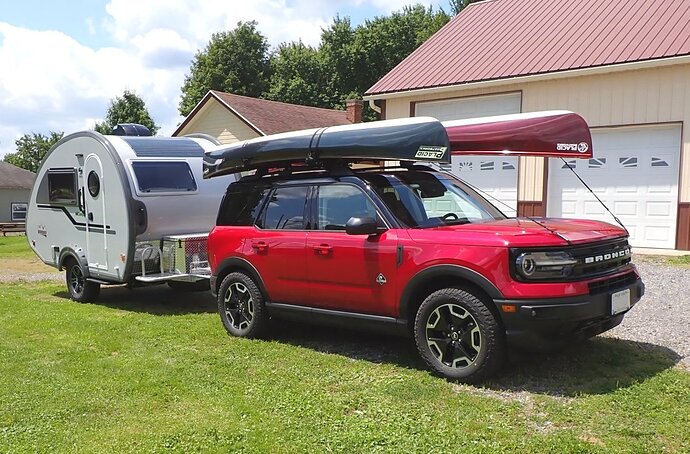 I put the tarp over all my boats. We stay fairly wet here and I want some air space to prevent mold .

I have a Delta 12.10 and this will be my first winter storing it. It’s mounted sideways on hooks on the wall of my garage. The garage is not heated, and we get temps down to -40’s in the winter. Also, about 2’ of the bow end of the hull is in front of a window. It doesn’t get a lot of direct sun on the west side of the garage but would get a bit in the afternoon.

I have the original, sort of metallic bubble wrap that the kayak was shipped to the store in, and I’m wondering if there would be any benefit to wrapping the kayak in that for the winter?

I thought it might help even out the temp between the hull portion in front of the window and the rest, and might help slow down the extreme temperature swings we get. From -40 F on day, it could be 0 F the next day, etc.

Bought this rack on Amazon and modified its length for sea kayaks. Have 3" webbing to add for RM boats. This is primarily winter storage. 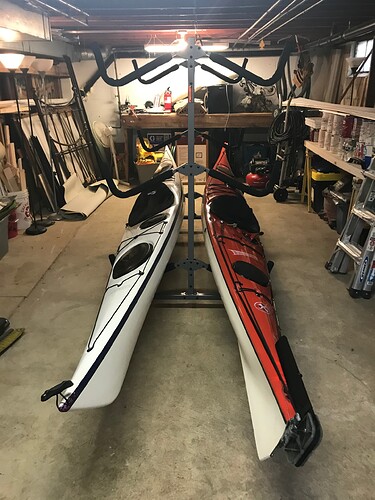 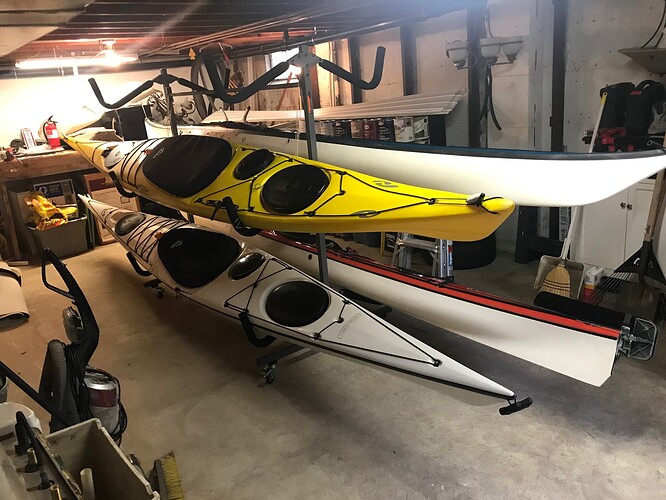 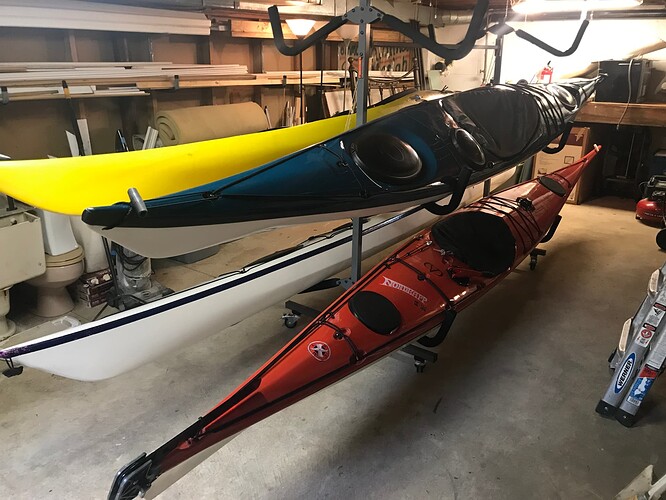 I think it is most important that the two j-hooks be located where the front and rear bulkheads are in the boat. The bulkheads are the strongest part of the boat, and therefore the best spots to support the weight of the kayak for long periods of time. Having the boats sit sideways on the j-hooks is the right thing to do (side is stronger than the bottom).

In terms of protecting the boats from sunlight through a window, covering the boats with the metallic bubble wrap or just an old sheet is a good idea. The temperature really doesn’t matter to the boats.

I was about to ask about hanging from a ceiling system via straps (right at the bulkheads) and if it was better to leave it sitting flat (bottom) or to cant it to the side a bit. Right now I have mine flat and I’ve noticed that the skeg slowly drops down a bit to a max of about 1/2" - 3/4" showing over the course of a few days, so I was going to cant it to one side to take some of the weight/pressure off the skeg.

I wouldn’t worry about the temperature difference, but the thermoformed plastic used in your Delta (as well as Hurricane and Eddyline) gets brittle at cold temperatures. Be very careful if you need to move the kayak when it’s really cold. 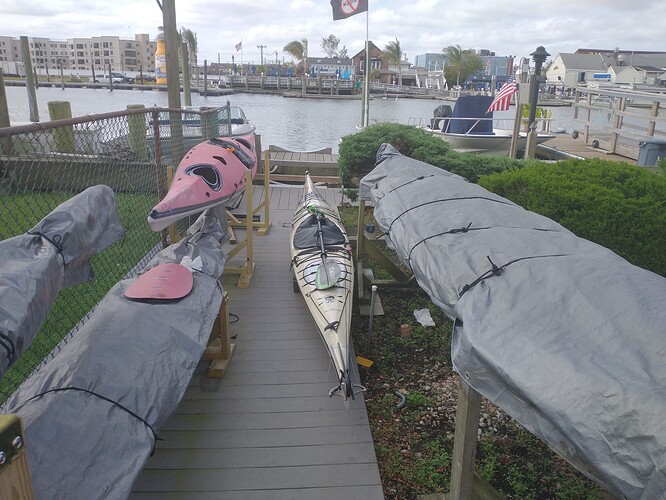 6x20’ tarp fold in half bottom open. Never had mold in 12 years. If kayak is to long put a black contractor bag on end. Make up 5-6 bungee’s to fit in different sizes. Loop and knot on bungee no knots, pop on and off fast.

Spent a good part of May cleaning out a shed attached to my garage so I could store my boats at home. The shed is 17’3" long. My Prana made it in with three inches to spare, but it was a challenge moving it around a tight corner then in between a couple of trees so I could haul it inside.

Fathom LV fits nicely under the Prana; the Samba is stored outdoors under the shed eves (with a cloth over the skeg box to keep critters and debris out).

I use Suspenz straps because they’re two-inches wide, padded, and have no plastic parts.

Maybe someday if I have nothing better to do, I’ll paint that wall. 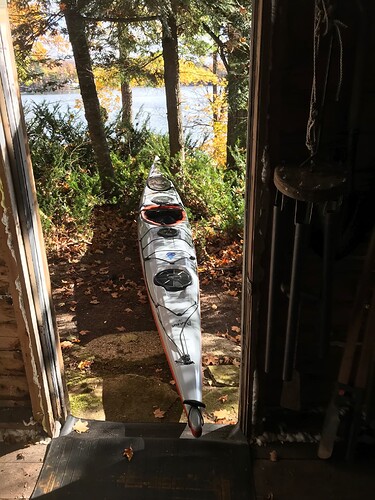 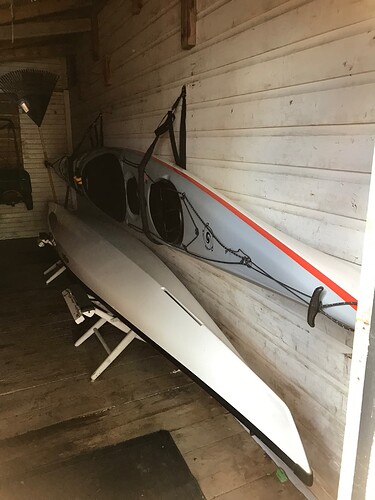 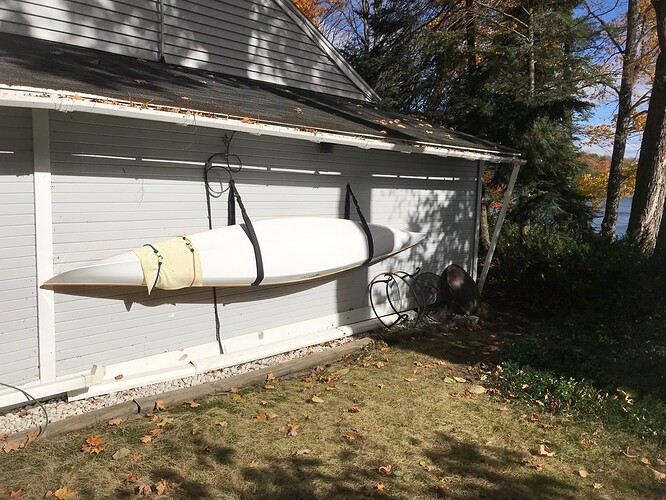 Why would you paint when you could paddle?

Here is my Northstar hoisted up above my car.

It is hard to tell but the hoist is mounted on a 2x4 that can be pivoted. The kayak is little longer than my garage, so to get it all the way up to the ceiling joists I lift it off the car, move the car, pivot the kayak and then hoist it the rest of the way. Once in place I secure it with a couple of straps for redundant protection. Each of the four straps corresponds (approximately) with a bulkhead.

This is the hoist system I got from Home Depot that I mentioned in my post above. 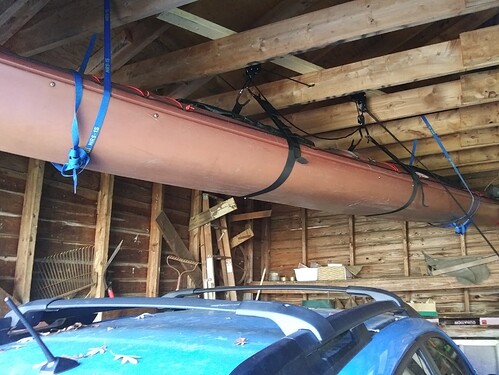 Bob, I had a somewhat similar 32’ wide by 20" deep metal-sided garage and workshop built 2 years ago that was also metal framed and roofed (Carolina Carports was the manufacturer.)

What I liked about this design was the clear span high ceiling and the fact that the garage doors are coil style so they don’t impede the overhead space where boats can be hung. Cost for this was under $10,000 installed (the crew erected it in a single day). The siding overlaps the foundation precisely so I don’t have to worry about moisture running in.

I have since added some racks as shown in the second pic. Eventually I plan to add solar panels on it, though it is only 40 feet from the walk out basement of the house and I will also be running a circuit out with a little 30A two breaker subpanel for lighting, 120 outlets and a circuit for baseboard heaters in the workshop/boat barn end.

The structural concrete foundation (which I had built with a vapor barrier so the floor would not “sweat” under stored items) also cost about $10,000, but that was in part because the excavation was a bear. There had been a small brick building on the site location (the pay office for a coal mine under the entire neighborhood that closed in the 1890’s) that had been demolished and then buried in place. Civil contractor had a hell of a time pulling out all the debris, some of which is obvious in the fill to the left of the building. Still waiting for the contractor to come back and finish connecting the double driveway (out of sight to the right) with a graded ramp to the garage bays, though I have gravel there now. The pandemic pushed back completing a lot of projects.

My main regret in building this was that I did not realize that a year later I would be buying a 10’ 6" tall 24’ long motorhome. Had I planned for that I could have ordered the structure 26’ deep and with the roof pitch oriented side to side so I could have had an 11’ door in the middle bay and been able to store the camper inside. Would have only been about another $5000 for the whole project to build that. 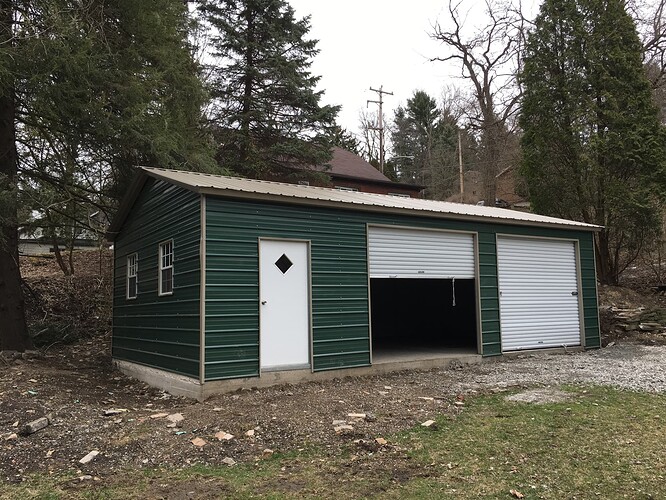 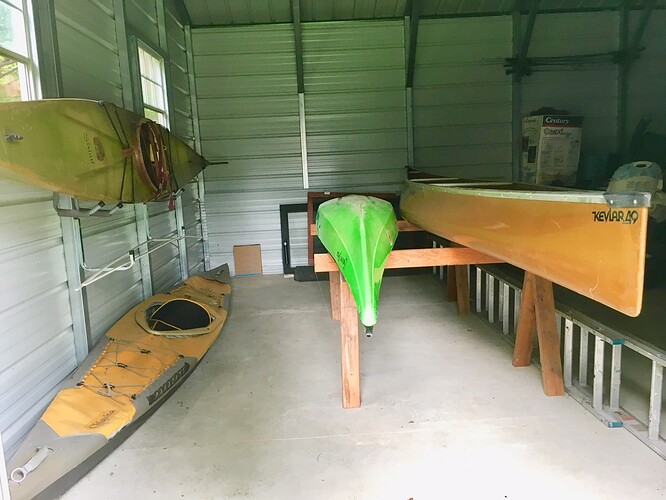 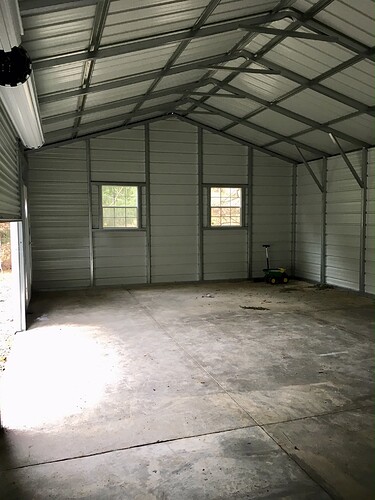 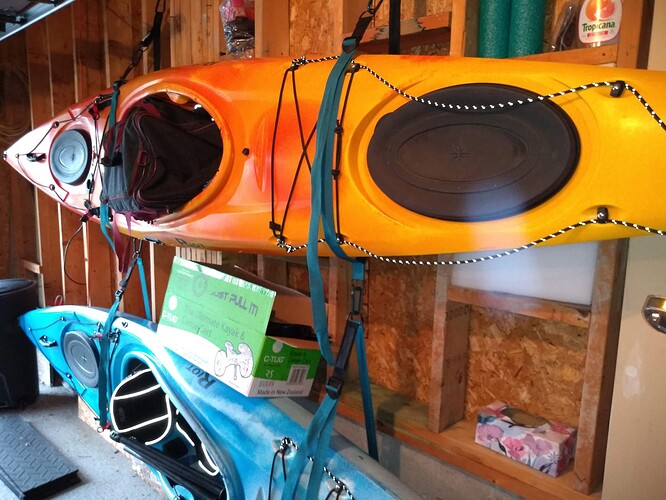 I also have the pulley setup I bought from Amazon for $20-30. It works. I didn’t like the crappy rope that came with it, so I bought some better quality rope from Home Depot. Being in an apartment, storage is very limited as is, so I pay a little extra for a covered parking spot for the kayaks and my motorcycle. So far, so good. 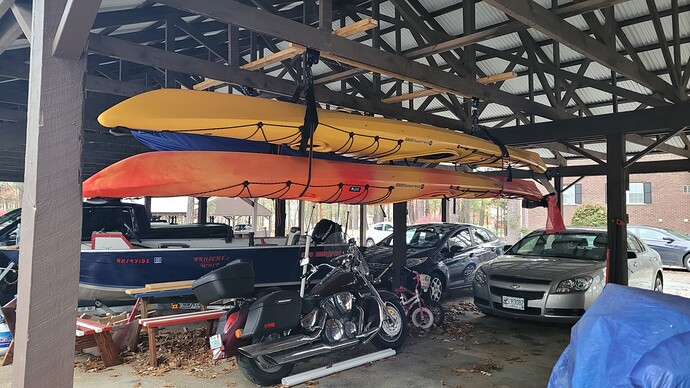 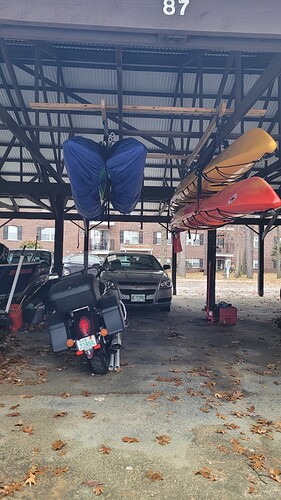 So, do you carry a kayak on the bike, or the bike on a kayak?

We just moved so we no longer have to store our boats outside, yay!

They will go in the barn but the barn is full with Mt. Boxmore right now but winter is coming, so they’ll go in the garage now. I’m was install the $22 hoists that someone mentioned above, that looks like pretty good kit! I needed a small drill bit to drill some pilot holes, but of course, those are packed, so I’m done for the day. But here’s how we are storing them tonight! 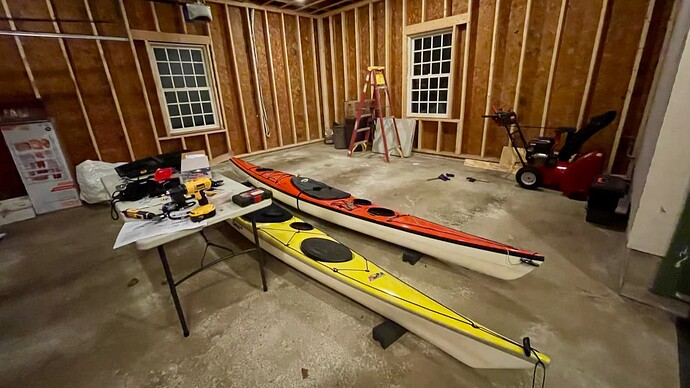 Off season in the walkout basement. Otherwise is keep it on the cart and slide it in next to my truck. Can’t get in the passenger side of the truck but beats hauling it around from the basement… 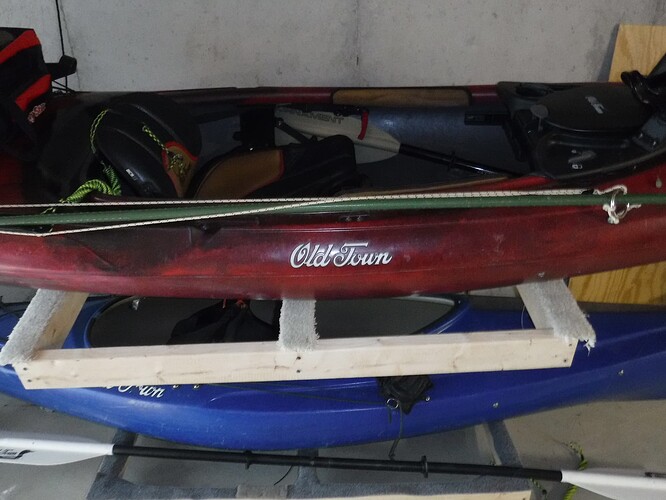 Sometimes, you have to do what you can for storage. My Tempest was supposed to get hauled to Maine where I could store it in the barn, but that trip has had to be cancelled. My garage here is stuffed, so the Tempest will have to spend the winter outside, upside down on plastic sawhorses. My trailer is in the photo too, under its “tarp tent”. 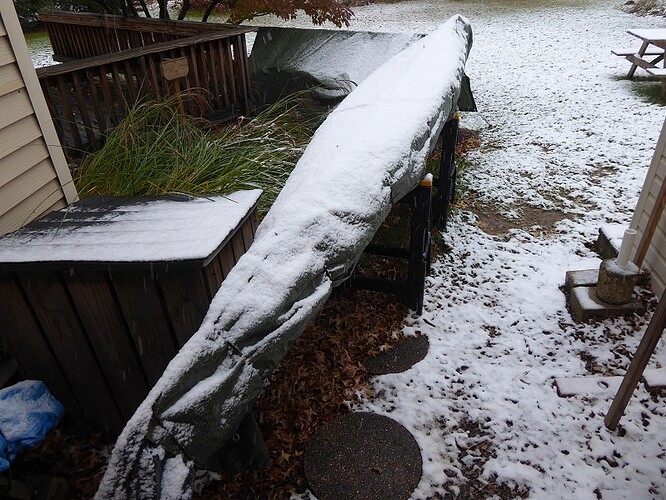