Rookie, that’s looks like the best idea yet. I’m buying it before it’s gone. You can go sitting up, like a kayaker.

I actually purchased (what was I thinking??) a dual kayak sailing cat rig a local guy built and was selling on CL some years ago. The thing was very well engineered and has an enormous mast and sail he constructed with marine fittings. He was a premises engineer at a hospital and amateur inventor who had salvaged a carbon fiber stretcher from some equipment the place had scrapped to use as a central platform between the boats, which are supposed to be connected to a massive wooden H-frame by Thule straps, The contraption includes a huge rudder and a pair of stabilizing side fins.

He claimed to have successfully used it on a local lake with a buddy (they both had 16’ RM SINKS that they mounted the thing on). But admitted that they got going so fast that the buddy was too scared to repeat the outing and he did not have any other paddling companions with the right size and shape boat to join him in subsequent outings. His wife said “no way” when he told her he would buy her a kayak like his own so they could sail together. I was a little skeptical once I drove out to look at the thing but he only wanted $100 and there was enough material in the thing and interesting hardware that I took it anyway.

At the time I bought it my SO and I both had similar RM SINKS so I thought we could try it out but we never got around to doing so before we broke up the following year. Since my personal fleet only includes one RM boat the parts for this cat rig have languished in my basement. I’m debating whether to continue to keep it to salvage the parts (there is probably over $100 worth of spar varnished treated lumber in it, not to mention all the stainless and brass fittings, the carbon fiber platform and the massive nylon sail) OR to set it up in the yard this coming Spring and try to unload it on another starry-eyed prospective kayak sailor.

The rig was meticulously fabricated but I suspect the functionality is questionable, even mortally risky in actual practice.

Try it out, and put your fingers in your ears.

Comes with all weeds and dirt shown here! 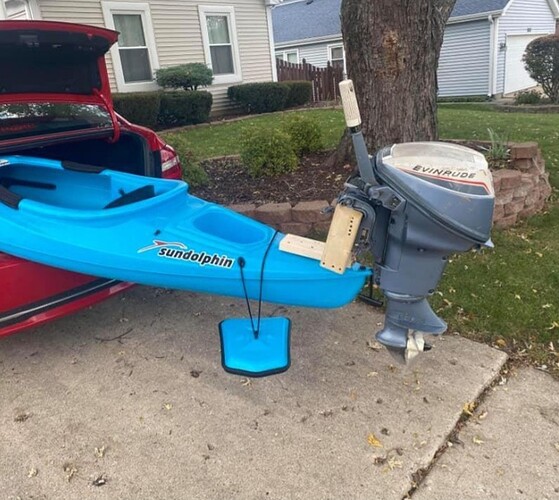 The future of kayaking.

The future of kayaking.

And a much better way to haul it than one of those pesky roof racks or trailers!

You got that right. I think it’ll work. I’m going to buy it. 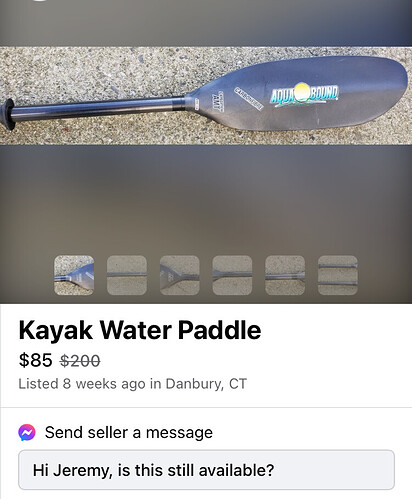 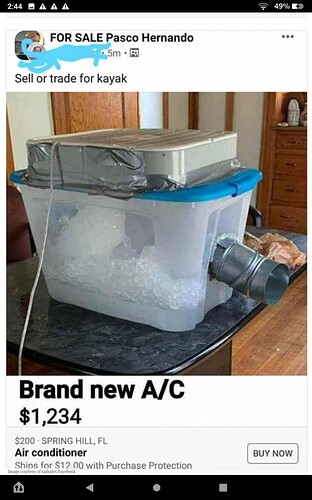 I wonder what kind of kayak they want…

Looks like the cockpit can hold a small lake.

Could make a nice planter box?

Are those Abalone shells hanging on the fence. I bet that’s it. They move to the beach and decided after one trip through the surf that it must be a “lake kayak”. Yeah. That’s the ticket. What is that cockpit liner, anyway?

Bath tub for a baby.

I don’t know about any of that, but if you’d seen the canoe I built back in the 70s it would fit in these ads.

No clue why they would make a composite, this short. But they are cute & unique.

No clue why they would make a composite, this short

Composite…not so much. Just fiberglass. But the real reason…it fits in the car. Easy to transport.

Fiberglass is a type of composite material - “composite” is the generic term.

Lincoln made a tiny composite kayak called the Little Diamond (or something like that) for a bit. I think it was around 10 feet long, actually looked pretty similar to the ones in this ad. Ugly and expensive (when new) but very lightweight. I don’t recall selling many.

Some really short kayaks! 12 inches and 14 inches, although some are size 12, kind of like shoes. 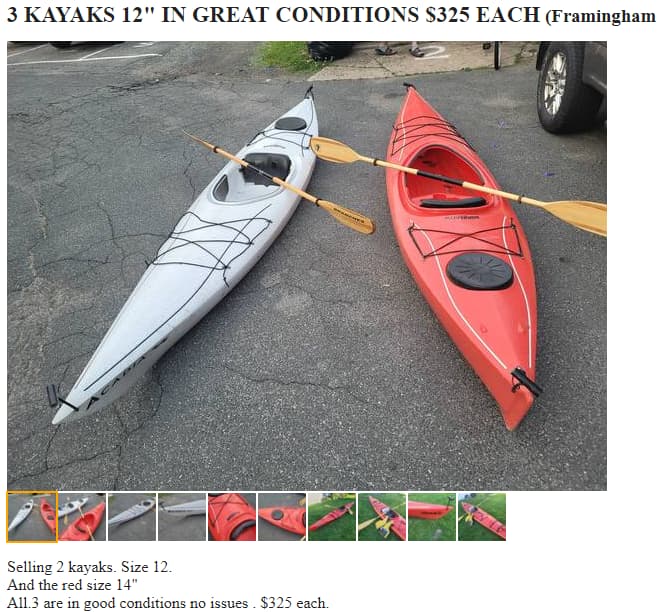 “What is this? A kayak for ants? The kayak has to be at least three times bigger than this!”