Five day 75 mile solo from Spanish ON, east to Bay of Islands and back via Croker and the Benjamins. 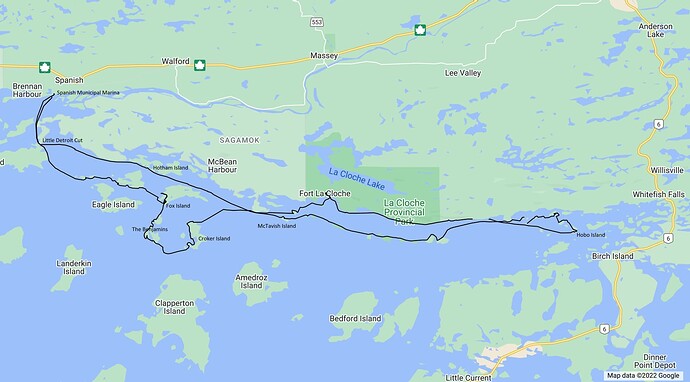 I prepared for the trip by downloading topo maps from GeoGratis spatial product index, cropping in Paint to make printed blowups, then running them through a laminator. When the 10-day forecast on wunderground showed a five-day stretch of good weather I was off to a motel in Blind River. I was at the Spanish Municipal Marina at 7 a.m and the boat was packed at the launch when the marina ﻿﻿office opened at 8. It cost under $20C for launch fee and parking. 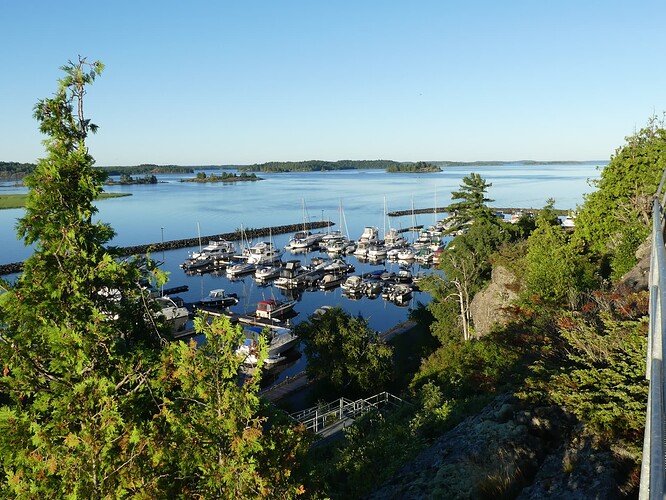 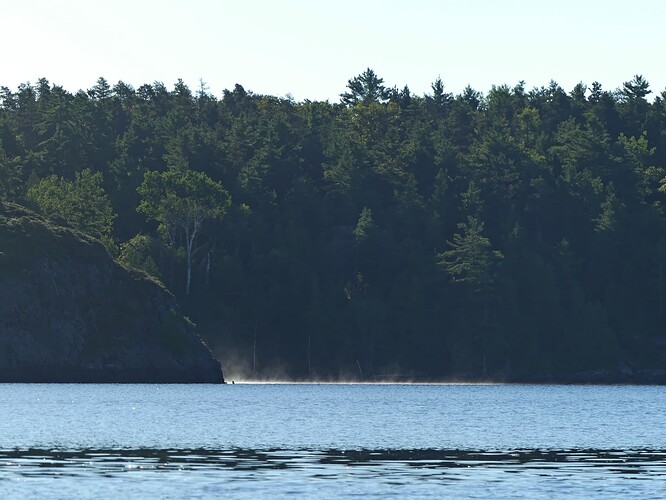 720 Morning mist, Black Fly Point, Spanish trip &#39;221920×1440 201 KB
There were nav markers and light power boat traffic through the cut. Going east past the Sagamok reserve, rock cliffs of the La Cloche mountains dominate the northern shoreline while Manitoulin’s wind turbines were frequently visible on the horizon to the south. In between are plenty of islands to explore. Winds were light and waves less than 4". A yacht would go by every hour or so. I found a good landing on bedrock at the big harbor on the south side of Hotham Island for a pit stop, mile 8.5. 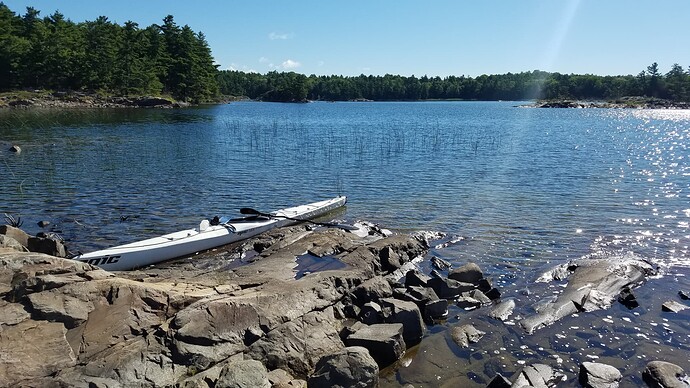 Continued east and found a rare sandy beach on the north shore of McTavish Island, mile 16, where I set up camp. The camp area was well used. By the time I was set up I had two sailboat neighbors in the bay. 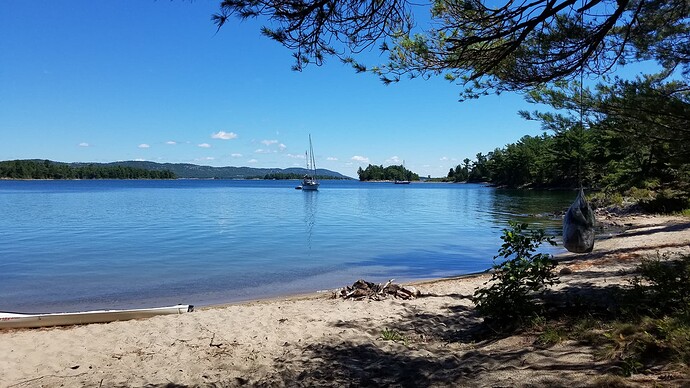 730 McTavish Island neighbors, Spanish trip &#39;221920×1080 311 KB
East of Little Detroit the water is clear enough to see 20 feet down. The water was warm enough for swimming. Underwater bedrock is slippery with growth that can be rubbed off to make it less treacherous to step on. All of the islands I stayed on had bare glacier-carved bedrock ridges covered in dried lichens and reindeer moss. The islands feature forests of maple, oak, spruce, picturesquely windblown white pine and some birch, occasional lush moss patches in the shade, grassy spots, boulder jumbles, and shores that are generally unfriendly for landing in a kayak. You can camp on Crown land so I did a little recon to check for houses when scoping out a landing; most beaches had houses. First Nation Reserves are closed to the public.

Day 2: The forecast called for winds reaching 15 mph from the SW in the afternoon. I continued east and kept to the lee of a long string of islands and rocks. 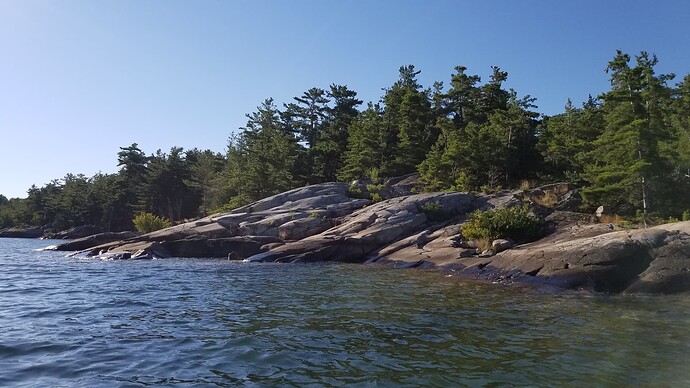 The mile passage between Channel and Barren islands at mile 4 combined wind-blown waves from the south with 1-foot swells from the open lake on my starboard rear quarter, resulting in some wallowing and a less-than-relaxed crossing. I encountered an interesting if somewhat smelly fish farm between High and Eastern Islands, mile 8.25. Rainbow trout! I crossed toward the mainland and followed a string of islets and rocks past Flat Point, mile 12.25, at the entrance to Bay of Islands. By then the wind had picked up but the bay was relatively protected and exploring it was a joy. I pitted on an island east of Bateman Island, mile 13.5; great place to land but a long carry to the nearest tent site. 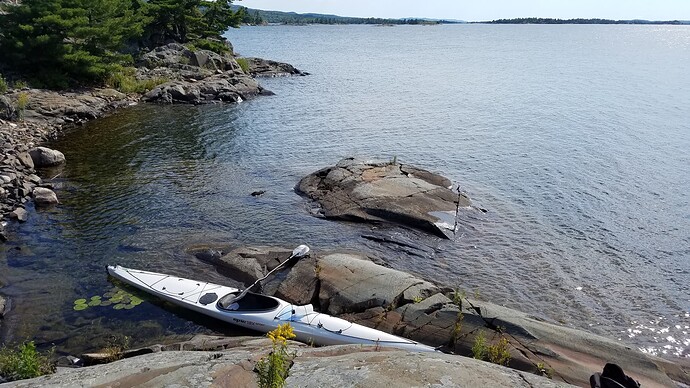 751 Pit stop east of Bateman Island, Bay of Islands, Spanish trip &#39;221920×1080 376 KB
I interrupted otters in Sharks Jaw Channel, explored tiny islands, coves and straits, and found a great place to take out and camp on a narrow strait on islands between Wells and Ireson Islands, mile 17.5. 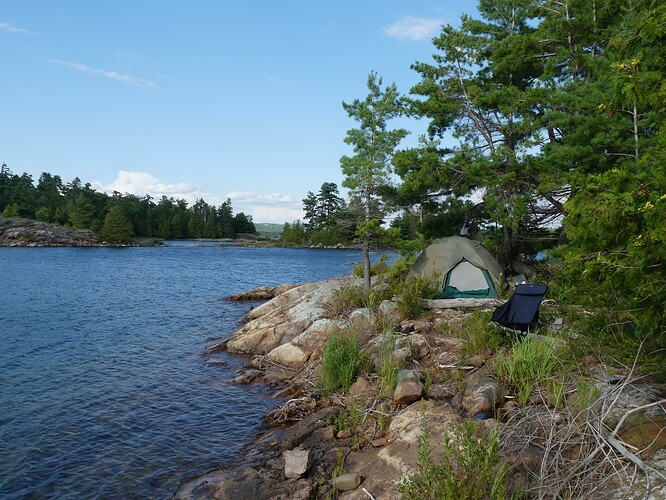 766 Hobo Island camp, Spanish trip &#39;221920×1440 408 KB
There was a complete disarticulated deer skeleton nearby, apparently of victim of wolves in the winter. I spent much of the afternoon on the island’s backbone looking out over dozens of islands as the winds rose and the whitecaps built up; the views in all directions were outstanding. 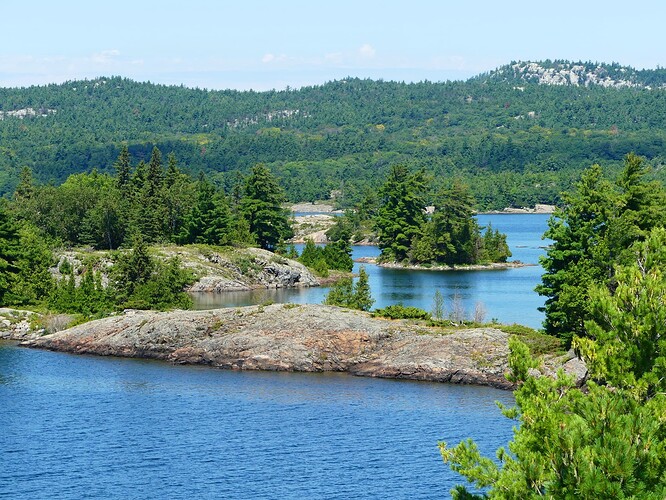 761 Bay of Islands from Hobo Island, Spanish trip &#39;221920×1440 551 KB
After dinner three people landed on the island in a runabout to walk the spine and watch the sunset. Paul told me I was on Hobo Island. The water level went up four inches that afternoon due to the constant 20-40 kph west wind piling water into the bay, and the wind howled as I fell asleep. 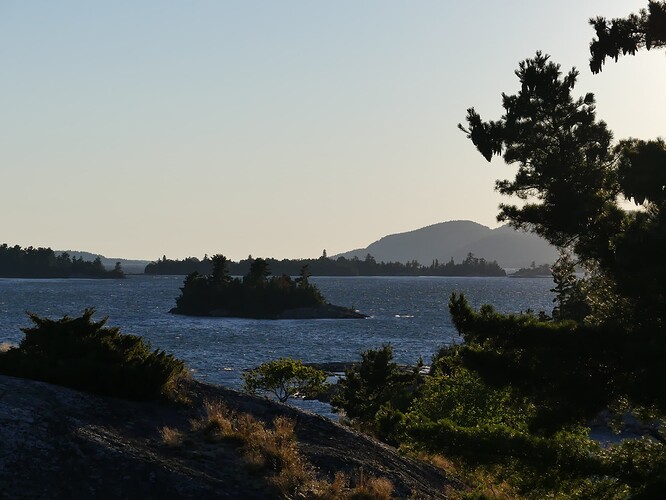 772 Bay of Islands, Spanish trip &#39;221920×1440 201 KB
The days had a rhythm to them. The high pressure pattern is calm mornings and winds in the afternoon, so I geared my activities to get going as soon as possible. Before leaving the tent in the morning I’d don my headlamp and get the sleeping bag, mattress, clothes bag and ground cloth packed. I’d pack the tent during breakfast and packed the boat by sunup. I’d apply sunscreen after an hour or so as the sun rose higher, and filter water when I was in open water. Finding a place to pit stop was not always easy. Eventually I’d explore to find a place to camp, looking for a beach or a 6 inch high bedrock shelf with deep water next to it to take out at. The afternoon itinerary was change of shoes, lunch, pitch and air out tent and sleeping bag, explore by foot and by paddle, swim, and enjoy the view from a ridge top in my chair. Then happy hour, weather radio (bilingual!), dinner, sunset from the chair, and getting ready for morning. This involved packing as much as possible the night before, putting the food in a hatch, setting up the stove for my morning coffee and getting the granola and Coffee Mate breakfast handy. I was usually asleep before dark.

Day 3: The wind and the water were calm. Forecast called for winds from the north, so I followed the coast back west past La Cloche Provincial Park. There were shallows with reeds well out into the lake. I found the mouth of Riviere La Cloche and paddled to Ft La Cloche, mile 13, where a waterfall was visible from the boat. ﻿There wasn’t that much else to see there. Sadly, phragmites is starting to take over the marshes. A short three miles later I found a beach on the south shore of an island NE of McTavish and made camp. This island featured strange night noises, possibly grouse. 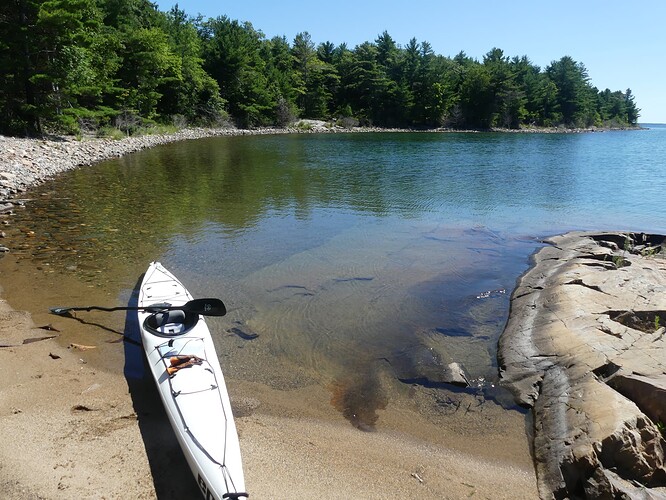 791 Beach landing, island NE of TcTavish, Spanish trip &#39;221920×1440 382 KB
Wildlife on this trip included gulls, mergansers, canvasbacks and geese. I heard loons every day and encountered several pairs while paddling. Bald eagles were common along the La Cloche coast. I saw a deer at my Day 3 camp and came across otters at Sharks Draw Channel and at Frechette Island. All of the islands had squirrels and I saw raccoon tracks on one of the beaches and minnows in the shallows. Bear seem to be confined to the mainland.

Day 4: I had two days to get back to Spanish and wanted to see Croker and the Benjamin Islands, which are reputed to be spectacular. They did not disappoint. My route took me past Sagamok Point and East Rock, then a 1.5 mile passage to Croker Island in light winds and calm water. I paddled along the western shore of the island into every cove and bay. Each point was solid bare bedrock slipping below the water, and rounding each one revealed another gorgeous scene. Croker and the Benjamins were also infested with sailing and motor yachts. They were tucked into every cove and there were even loops embedded in the rock so that they could tie up close to each other without colliding when the wind shifted. 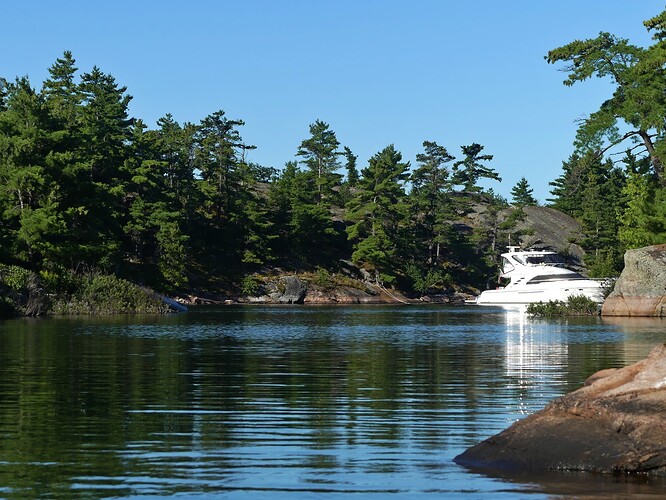 811 One of five yachts in a cove on Croker Island, Spanish trip &#39;221920×1440 361 KB
I paddled to the Benjamins via the Sow and Pigs, mile 8.5, which are a line of very cool rocks, well worth exploring but very exposed. The Benjamins were somehow even prettier than Croker. I pitted at a cove facing south with no protection against a south wind, mile 10, that had no yachts and no loops to tie to either. It had a beach situated between two high bedrock headlands. I was sorely tempted to set up camp but I wanted to keep exploring. 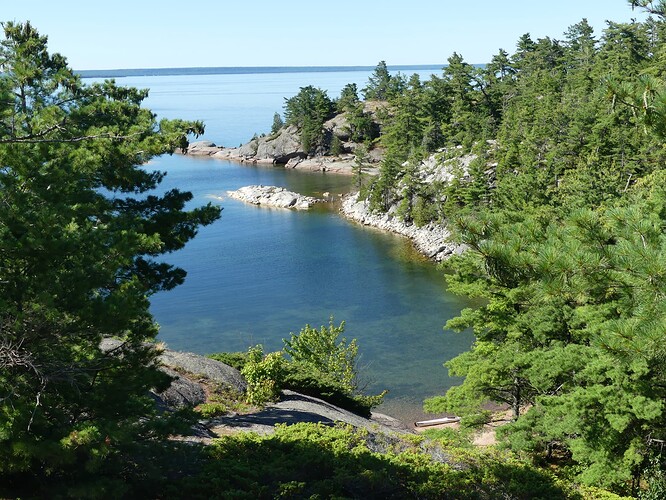 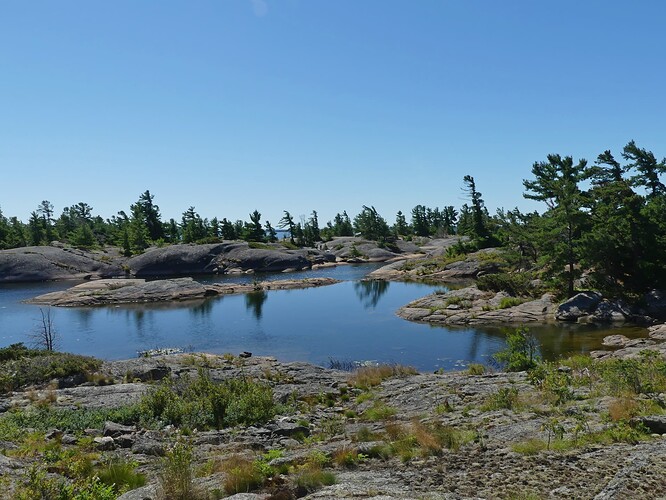 835 P10201931920×1440 329 KB
One channel went to Fox Harbor (full of sailboats) from which another channel led west. Five paddlers passed by going south towards the Benjamins from McBean in rising chop. They ended up camping several hundred yards away, getting out on bedrock.

I talked to several sail boaters, all very friendly and somewhat curious about how I went about my trip. I got the impression that sailing life is similar to RVing, with an inflatable runabout to explore places that they dare not take the boat. One guy I talked to was anchoring for three weeks at a prime spot at Croker. His friend’s sailboat was tied up alongside; that way when one of them had to go into town for groceries or a pumpout the other would be there to save the spot. I got the impression that Bay of Islands, pretty as it is, is not popular with deep draft boaters. One told me the yachts start leaving the second half of August (its a long way back to home port), and apparently most are gone by September. 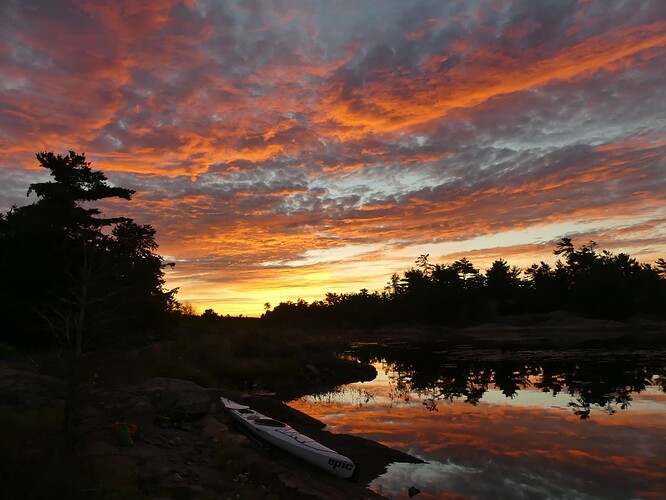 865 Sunrise at Fox Island camp Spanish trip &#39;221920×1440 178 KB
I headed west between Frechette and Eagle Islands, following a string to Aird Island and then north thru the cut back to Spanish, mile 11, where I arrived at 10. On the way out I visited the memorials for the Spanish Indian Residential Schools, part of the abusive system that finally closed in the ‘60s.
I’m already thinking about my next North Channel trip: McGregor Bay, Kilarney and French River beckon.
8 Likes
Lake Huron's North Channel?
mickp August 20, 2022, 9:46pm #2

Wow, beautiful! Thanks for sharing.

I have been wanting to sail or paddle there for a while now. Thanks for the motivational post.

Thanks also, for all the specifics you added of your trip. Really enjoyed the read.